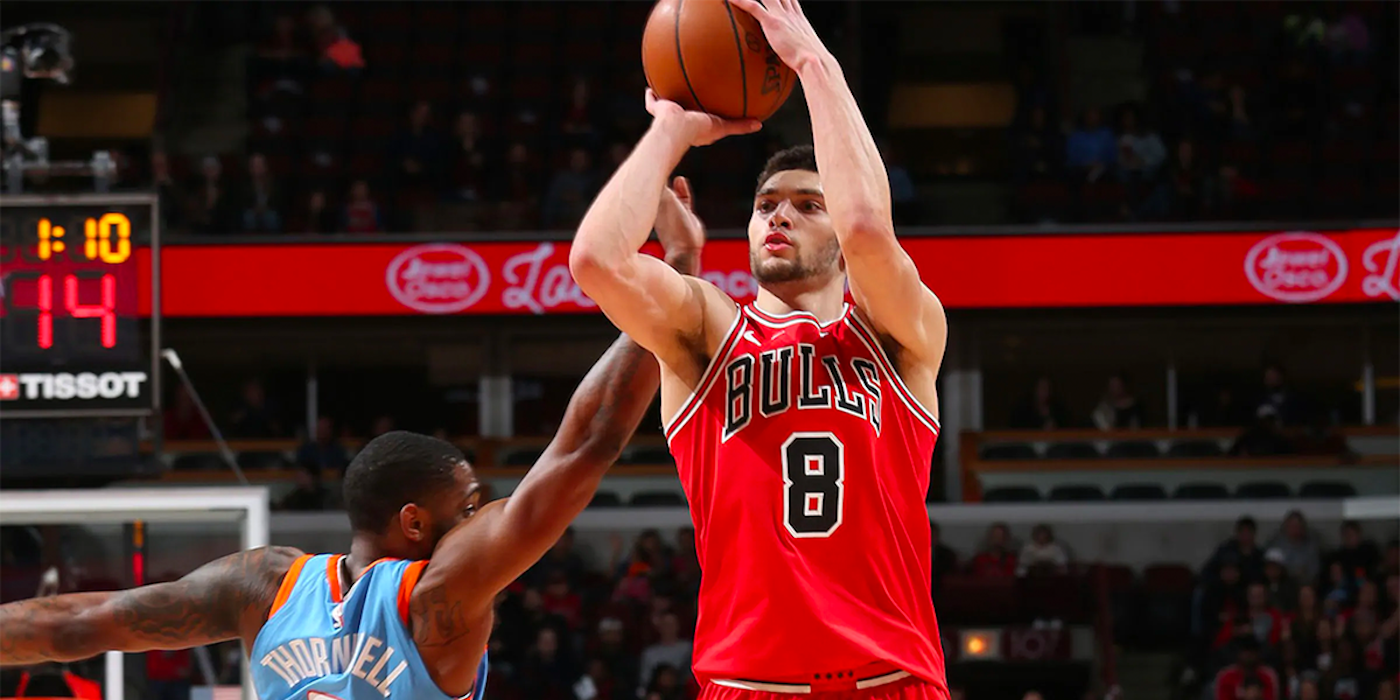 Zach LaVine's recent comments touched off another round of the debate over midrange shots. There's an important element missing from all of the discussion, though: context.
October 17, 2019

If you read the article that touched off this latest midrange debate, you’d be forgiven for wondering what all the hubbub was about. Sure, Zach LaVine is unhappy that the Bulls have asked him to stop shooting midrange shots, but that’s not explosive news. Joe Cowley, writing for the Chicago Sun-Times, used LaVine’s quotes as a way to insult statistical analysts and “analytics bloggers”, but that’s nothing novel either. The media has been playing up a perceived tribal war between the jocks and the nerds to generate more attention for decades now.

But then Rachel Nichols and ESPN picked it up and Kevin Durant jumped into the discussion by arguing with Matt Moore on Twitter, and so, once again, the basketball cognoscenti are discussing whether it really makes sense to take fewer midrange shots.

Sometimes it’s just the open shot. Why pass up an wide open look to shoot a semi contested shot?

The odd part of the debate is that this isn’t a matter of belief or opinion, like, say, the debate over abortion law. It’s a matter of competition. When it comes to abortion, both sides have moral arguments and the goal is to convince the other side. But the beauty of sports is that the goal isn’t to convince—it’s to win. There is no subjective judge. The courtroom is the court.

You know who loves that we’re still debating this? The Houston Rockets. They have taken the fewest midrange shots in each of the last seven seasons, and have finished in the top 11 on offense in each of those years, including placing in the top four on offense in over half of those seasons.1 They’re as strong a believer in the “avoid midrange” side of the debate as there is. But they’re not mad that there are still important holdouts. They’re not trying to convince the rest of the league they’re right. They’re just laughing—laughing all the way to the win column.

Before you go out preaching the gospel of eliminating midrange shots, though, do you know who else had a top five offense last year? The San Antonio Spurs. Those same Spurs who took by far the most midrange shots in the NBA. That makes three of the last four seasons that San Antonio has had a top 10 offense and taken more midrange shots than almost every other team.

This issue isn’t black-and-white. Figuring out which shots are good shots and which are bad requires nuance. Nuance that is often lost in a debate where the volume gets turned up to 11.

Not all midrange shots are created equal. Not all threes are created equal. Saying a team will score more by attempting more threes and fewer midrange shots is like saying someone will be healthier by eating less and drinking more. That may be true—unless they’re eating fewer whole foods and drinking more soda. The details matter. We can’t speak so broadly and say all midrange is bad and all threes are good just like we can’t say all food is bad and all drinks are good. We need to be more specific here.

An 18-foot pull-up jumper by a solid shooter with the clock winding down is not the worst thing in the world, while an off-balance, contested long two with 15 on the clock is a bad shot. Unless, that is, the shooter is Kevin Durant and he’s playing with a bench unit, in which case it might be the best shot the team will get on that possession. LaVine is right when he says that in the playoffs defenses are geared to take away the rim and threes and therefore it can be helpful to be able to hit midrange shots. Context changes our analysis, so having this debate without acknowledging the context is silly.

This is true across all levels of the game. When I worked for teams I’d often play pick up with the staff. Almost every time I took a midrange shot the coaches would laugh and jokingly rib me, asking how I could advocate for reducing midrange shots in the NBA, but when I got on the court I took those shots. I’d laugh and reply: “If I could dunk, I wouldn’t take midrange jumpers.”

This was all in jest, but there’s truth there. I’m 5-9 and can’t jump. The NBA three point distance was an adjustment for me when I first played on it. I’m a decent shooter, so if I got an open midrange shot that’s a good shot for me. Needless to say, Zach LaVine and I are very different. He can do things like this:

For a player like that, it seems perfectly reasonable to encourage him to use those abilities as much as possible. That doesn’t mean that, at the end of a close game, with a defense playing a style specifically geared to take away the rim and threes, a pull-up jumper is a bad shot:

Taking an off balance foul line jumper after backpedaling, meanwhile, when a wide open shooter is standing a little bit behind you, is a bad shot:

I’ll repeat: that’s not about the location of the shot as much as it is about balance, rhythm, and having an open teammate.

Players at every level need to understand what a good shot and bad shot is given the situation—who they’re playing with, the shot clock, the time and score, the defense, whether they’re on balance, and their own abilities. I coach high school basketball, and I don’t tell my players not to ever shoot midrange shots. Instead we talk about what a good shot is and what a bad shot is. When one of our best rim attackers pulls up from 15 feet when he has an open lane to the basket I tell him it’s a bad shot. The same as if one of our small guards who’s a good shooter doesn’t take an open 15 footer and puts his head down to throw something wild up at the rim over a shot contest.

That’s nothing revolutionary. Coaches helping players make better shot decisions is something they’ve been doing as far back as coaches have existed. The only thing that’s changed is our understanding of what a good shot and a bad shot is.

So why did something that should be fairly standard coaching turn into a national story? Because LaVine took issue with it. Perhaps his quotes were taken out of context or made to seem worse than they were, but if not, LaVine chafing against this change, and specifically the team’s statistical analysts, reveals some missteps in the implementation of this plan.

The easiest part of using analytics to improve a team is doing the actual analysis. Most of the hard work is in how you take the results of that analysis and translate it to the floor. That’s an effort that requires the entire organization. In this case, reading between the lines, it looks like the Bulls struggled in selling the analysis to LaVine, presenting a unified front, and using their philosophy to change how they practice.

Communicating the analysis involves convincing the player that changing is truly best for the team. Sometimes that involves using numbers or graphs, but sometimes not—that depends on who the player is and what you think is most likely to convince them. But selling the changes to the player is incredibly important—if he’s fighting against them, the chance of those changes succeeding is much smaller, no matter what the math says.

Lastly, changing a player’s shot selection isn’t an easy process. Getting LaVine to feel comfortable avoiding midrange isn’t as simple as making a rule that he can’t take midrange shots. Players aren’t robots. They’re not doing math when they’re out on the court. Getting them to shoot better shots starts in practice the same way getting better does in any other way: developing the right skills, creating new habits, and being put in better positions through schemes.

Regardless of anything else, KD is 100% right that to be successful, players have to operate on “feel.” Conscious thought means too slow at game speed. The hard part is changing those instantly made decisions as it becomes clear other choices are more productive…

When asked about LaVine’s comments, Bulls Head Coach Jim Boylen made it clear that is what Chicago is trying to do: “We believe in the math and we coach to the math. We organize our practices to the math.” But that process takes time and, again, requires buy-in and complete commitment.

That’s what the Spurs do. They may not shoot from the most efficient shot locations, but they score efficiently because they focus on the context of the shot. They get open shots from their best shooters by making it clear what they consider good and bad shots, getting buy-in, and practicing accordingly.

This is what gets lost in all of the yelling about midrange shots. The truth is that the actual shot location has a lot less to do with outcomes than we acknowledge. The context of the shot matters. The way the coaches communicate and train their players matters. Whatever a team’s philosophy, the challenge is the same: determine what are good and bad shots for their players in different situations, communicate that to the players so they buy in, train them so it becomes instinctive, and put them in position to make it easier to make those decisions. Do that, and the score will take care of itself.