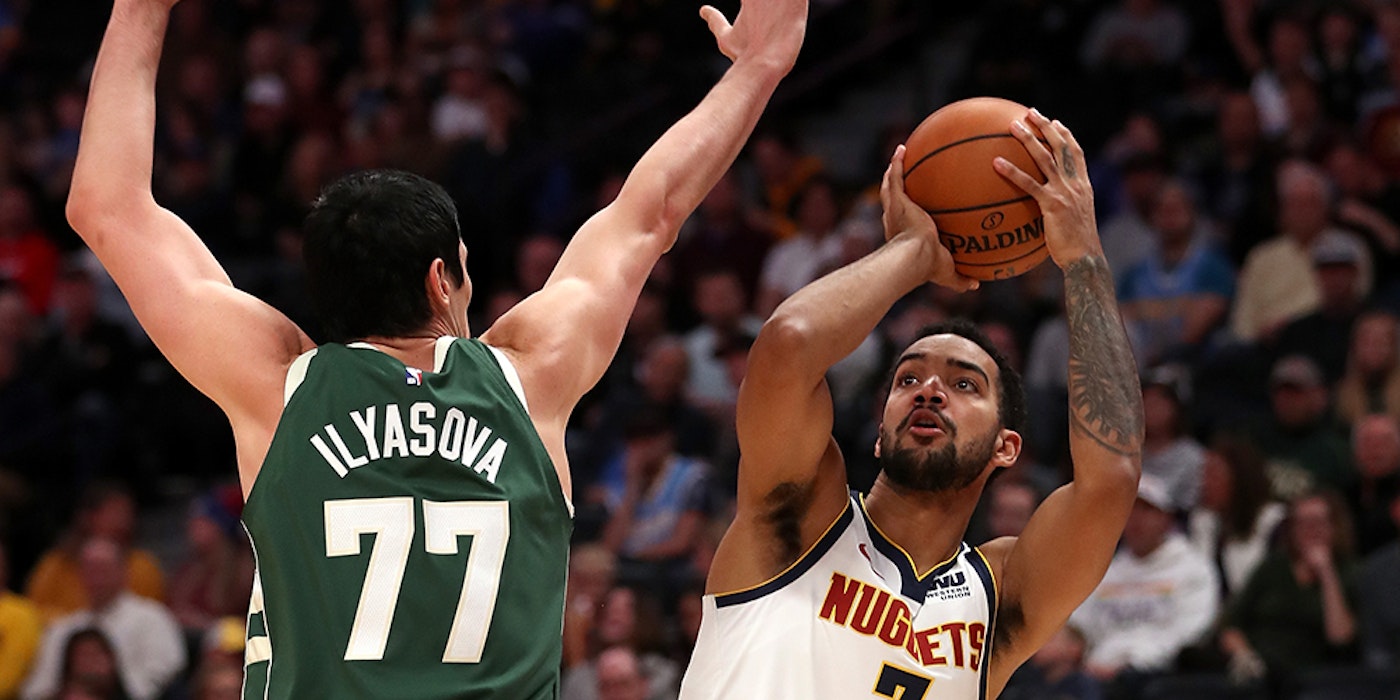 How, in an NBA obsessed with long range looks, does the best defense give up the most threes? The answer lies in a subtle but very important change over the last few years of NBA basketball.
February 21, 2019

If it hasn’t sunk in yet, it should soon: these Milwaukee Bucks are good enough to win the whole thing. That may come as a surprise if you’re still anchored to preseason expectations. Back in October, it was an open question whether the Bucks would even win 50 games. But here we are at the All-Star break, and Milwaukee has almost met that mark. They are beating teams by an average of 10.1 points per 100 possessions1, the 8th best mark of any team in the last 16 years.

Their improved offense has gotten most of the attention. As Ryan Nguyen wrote before the season here on Cleaning the Glass, Mike Budenholzer’s scheme emphasizes shooting and spacing, and it has jumped Milwaukee from the 12th best offense last year to 2nd so far this season. The Bucks never ranked higher than 22nd in their frequency of three point attempts under the Bucks’ previous coach, Jason Kidd; under Budenholzer they rank second, with only the launch-happy Rockets eclipsing them.

As the head coach of the Hawks, Budenholzer was lauded much more for his offensive strategy than his defensive acumen. In truth, it should have been the reverse. His Atlanta teams were consistently near the top of the league defensively, ranking in the top five for three straight years, while they were only once even above league average on offense.

Kidd’s defense, meanwhile, was widely noted to be based on a style that didn’t work in the modern NBA. In fact, the first article I ever wrote for this site, “Do the Bucks Stop Here?”, was about Kidd’s overaggressive defense. So we should have anticipated an improvement. But even so, their performance thus far is a surprise: as of the All-Star break, the Bucks rank as the #1 defensive team in the NBA.

They’ve done it by following the formula I laid out in “Do the Bucks Stop Here?”, a formula that has been followed by the Spurs for decades2: playing a conservative style of defense that aims to force teams into midrange shots rather than turnovers. What these kinds of defenses lose by forcing fewer turnovers they make up for by keeping opponents away from the rim and off the three point line, defensive rebounding, and not fouling. As I wrote back in 2016:

In the 20 years since Gregg Popovich and Tim Duncan first teamed up, the Spurs have ranked in the top five on defense in all but three of those years (and were still in the top 11 in those three “off” years). In each of those 20 seasons they have not once ranked outside the top six in forcing midrange shots, but in 14 of those 20 years they ranked outside the top half of the league in forcing turnovers.

The Bucks this year are a picture perfect example of this formula: they rank first in shot defense, second in defensive rebounding, and first in keeping opponents from scoring from the foul line, but just 16th in forcing turnovers. Well, picture perfect except for one stat: Milwaukee ranks 30th in preventing opponent three point attempts.

Huh? How does that make any sense? How does a coach who clearly believes in the power of the three point shot on one end completely neglect it on the other? How does a Spurs disciple, coming from a franchise whose defense ranked in the top 10 of taking away opponent threes for two decades straight, rank 30th in that stat? How, in an NBA obsessed with long range looks, does the best defense give up the most threes?

The answer to that mystery begins with this graph: 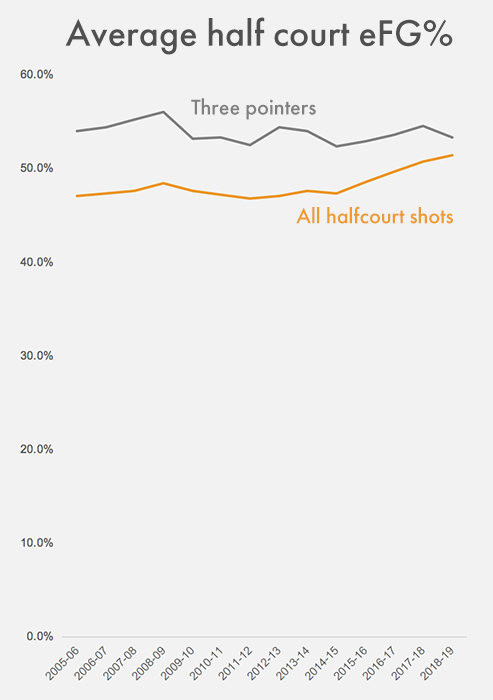 Let’s start with the orange line. For the 10 years up to and including 2014-15, the average team eFG% on half court plays was right around 47-48%, sitting basically unchanged over those seasons. But starting in 2015-16 that line started going up and to the right, and it’s now in its fourth year of steady progress. This is a really important change: after staying around the same for a decade-plus, the average half court eFG% has gone up by around one percentage point in each of the last four seasons.

But, as you can see from the gray line, teams aren’t shooting better from three than they were during the flat portion of that graph, when offensive efficiency was staying similar. In fact, they’re shooting slightly worse. The increased eFG% is mostly a result of replacing lower efficiency midrange shots with their higher efficiency three-point counterparts. Additionally, more three point shooting has meant defenses have had to cover more ground. Defenses covering more ground has meant the rim has been more open. A more open rim means offenses have increased their rate of attempts at the rim in the half court, and finished better there: the average team made 58% of their shots at the rim in 2014-15, while they have made 62% so far this year.

Which brings us to Milwaukee’s true strength: they absolutely own the rim. The Bucks have allowed the fewest shots at the rim this season, by far: the gap between Milwaukee and the second best team in preventing shots at the rim, Golden State, is the same as the gap between Golden State and the 12th ranked Raptors. Not only that, but when opponents do manage to get to the basket, they almost always find a defender waiting for them. Milwaukee has also allowed the lowest FG% to opponents at the rim. And, as noted earlier, they have allowed the lowest rate of free throw attempts to opponents, free throw attempts which are generally earned on shots around the rim. The Bucks don’t only wall off the restricted area—they build a moat around it and raise the drawbridge.

To accomplish this, though, they have to give up something. And the Bucks choose to give up threes—a lot of them. They’ll drop their big men back and task them with patrolling the paint, even if it means letting an opposing big man get off an open look from beyond the arc:

It’s not dissimilar from what great defensive teams of the past would do to force midrange shots: help off a midrange shooting big man to take away any chance of scoring at the rim. Only this time the help is off a three point shooter. Isn’t that a problem?

The Bucks, then, are exploiting an important part of the NBA’s shot selection change. The tremendous increase in three point volume hasn’t only been about good shooters shooting more, but also about shooters who at one point would never have been allowed to shoot threes being given the green light. That means there’s more variety in three point shooting ability than ever, and that variety means, to a greater extent than ever, who is shooting the three matters.

Put another way: it used to be that most threes were good shots for the offense and defenses could be judged by how few they allowed. Now, because of the across-the-board increase in offensive efficiency and the increased variety in shooting ability, not all threes allowed are bad threes.

And no team has exploited that fact more than the Bucks. To measure this, we can do something simple: divide all of the three point shooters in the league into those who have attempted at least 50 non-corner threes this year and shot at least 35% (league average) on those shots, and those who have not. We can roughly classify these as “above average” and “below average” shooters. Then we can see the rate of non-corner threes allowed by each defense in the half court to these two types of shooters.

Which brings us full circle. The league has adapted, with more emphasis on spacing and long range shooting. Offenses have taken players who previously would not have been given license to shoot threes and let them fire from behind the three point line. Defenses, worrying about those shooters, have been stretched thin, opening up the rim. The Bucks, though, have put their foot down. Their defense says: we’re not getting lured out to the perimeter by your so-so shooters. Fire away. We’ll live with it.

Just five years ago, this would be a flawed strategy. Giving up that many threes, even to below average shooters, would be enough to prevent a team from having a top defense—let alone the league’s best. But basketball is dynamic. The best strategic choices change depending on what other teams are doing. And the NBA has been changing so quickly in recent years that the lessons we learned and the math we relied on just a few seasons ago may no longer apply.