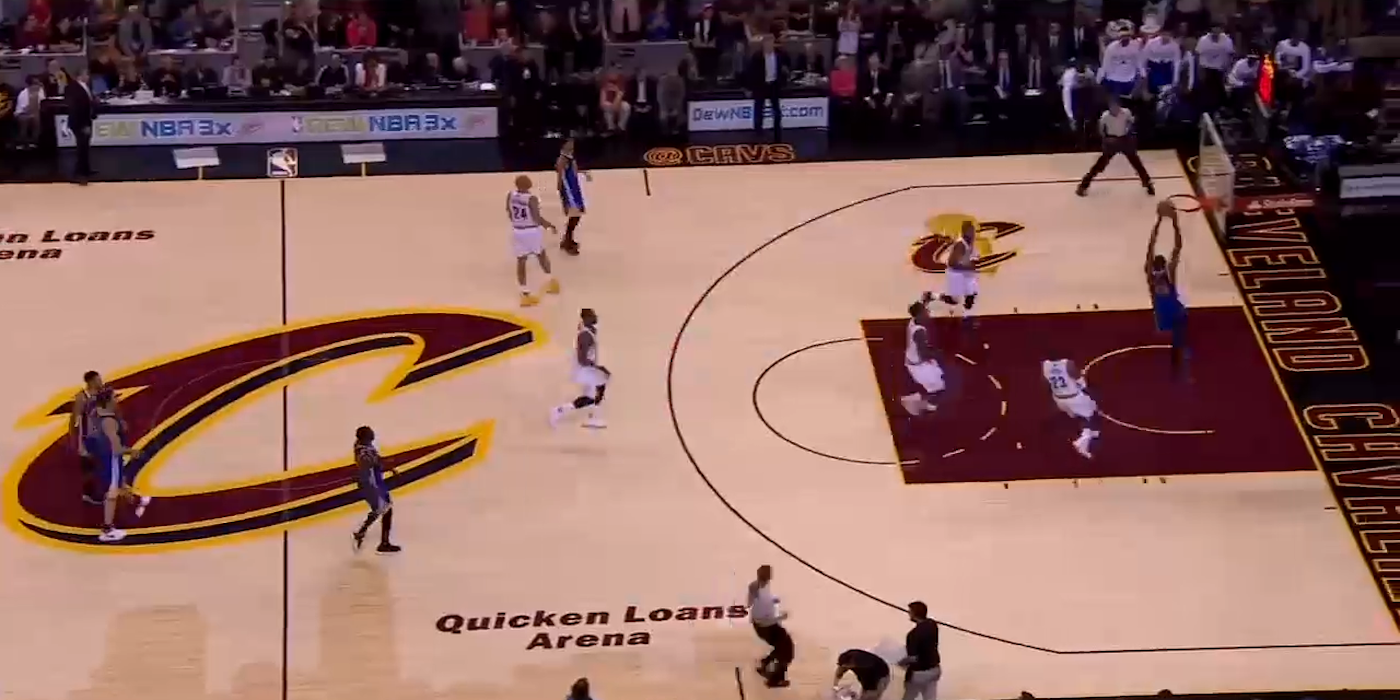 The Cavs broke about every transition defense rule in the book in the Finals…and that might be reason for optimism. On transition defense in general, the Cavs' in particular, and what it tells us about what they do now.
June 15, 2017

The question was raised before the confetti had even settled: where do the Cavs go from here? If they end up facing Golden State in the Finals for a fourth straight season next year, how can they be more competitive? What roster changes do they need to make to be able to beat (or even just challenge) the juggernaut in the Bay?

It’s possible Cleveland has to do something drastic. The Warriors are an extremely good team — maybe even the best ever. And the Cavs don’t have the salary cap flexibility to sign a big name free agent, or the young players and future draft picks that might be enticing enough to make a major roster upgrade through a trade. That leaves one remaining path for a big personnel change next year: including Kevin Love or Kyrie Irving in a deal.

But it’s also possible they don’t have to go that far. Perhaps the Cavs have ways to get better without personnel changes — internal improvement might be enough. And nothing makes that case better than a look at their transition defense.

The Warriors outscored the Cavs by 7.4 points per 100 possessions in non-garbage time in these Finals, a large margin that translated to their 4-1 series win. For context: teams favored in Vegas for regular season games by 7.5 points have won around 75% of the time. But, astonishingly, the gap in half court efficiency was not very large: only about 1.5 points per 100 plays1. Cleveland played close to even with Golden State in the half court. The big difference in the series was the Warriors’ ability to get out on the break: Golden State scored an estimated 25 transition points per 100 possessions while Cleveland scored an estimated 16.

As I wrote in my Finals Notebook after Game 2:

Golden State had the best estimated transition offense in the league this year, while Cleveland’s transition defense ranked 28th. There’s no greater disparity in any major stat category between these two teams.

A year ago, in the 2015-16 season, the Cavs had the 12th ranked transition defense, and their Finals performance followed that: transition defense was an enormous factor in their victory. Cleveland was outplayed in the halfcourt — but they managed to both crash the glass and snuff out the Warriors’ transition attack to make up the ground and win the series.

Cleveland did not play transition defense like the 28th ranked team in these playoffs either — their numbers were much improved in the Eastern Conference rounds. So it’s likely they believed that would continue to be the case in the Finals. That when the time came they would ramp up the effort level and it would no longer be a problem. This theory lasted right up until they were sliced by the Warrior buzzsaw. Golden State got out on the break even more often in the Finals than they did during the regular season, when they led the league in transition frequency. And they were extremely efficient when running in these Finals: they converted those opportunities at a whopping rate of 147 points per 100 transition plays, compared to their 3rd ranked regular season rate of 127 points per 100 transition plays.

While even the best transition defenses can’t fully take away the Golden State break, if a team wants to beat the Warriors 4 out of 7 times, they can’t give them anything easy. This is the pressure Golden State applies: they are so talented and so well coached that details can’t be overlooked. “T”s need to be crossed, and “i”s dotted. And transition defense is more about details than it might seem.

The Details of Transition Defense

Effort is certainly a part of transition defense — maybe even the largest part. But if transition defense was solely about desire we wouldn’t have seen the Cavs play like they did in these Finals, when the stakes were as high as they could be. Cleveland couldn’t flip the switch when they needed to, and it’s because stopping the break is about more than willpower.

Transition defense starts with offense. How a team’s players are positioned when a shot goes up — do they have shooters deep in each corner, or a player cutting to the rim? — can have a significant impact on the opposition’s ability to get out and run. The location of shot attempts can have a similar impact: a rim attack by a guard or a corner three off a drive and kick can leave the offense in a compromised position if they miss. Lastly, players’ decisions to go for an offensive rebound — either hanging around the paint or crashing in from the perimeter — can make a big difference as well.

The next phase of transition defense occurs as a shot is being taken. The worst thing a player can do at that point is stand and watch to see what happens — it accomplishes nothing. They need to make a decision to either crash the glass or get back. But the Cavs did a fair amount of watching in these Finals:

While the ball is in the air, particularly on a long jumper, there’s an opportunity to take a few steps back and gain some important ground without huge effort. The best transition defenses tend to do this very consistently. For example, watch a few of Utah’s possessions against Golden State from Game 3 of their playoff matchup:

On Cleveland, only Kyle Korver did this consistently:

Cleveland was often so concerned about the Warriors’ shooters that they would cover a shooter and leave a cutter open at the rim.

Their concern about shooters also meant they didn’t always stop the ball:

The Cleveland defenders were caught in a bind — leaving Curry open for three doesn’t feel like good transition defense either. But, ultimately, Durant dribbling with a full head of a steam towards the rim is the biggest threat. As a defense you have to force the pass, hope that buys enough time for teammates to sprint in behind, and if they don’t get there, pray for a miss.

These responsibilities take precedence over finding an assigned matchup. As one of the coaches I worked with often said: “you don’t have your man, you have a man.” The defense has to put out the fire. Until that happens players can’t be concerned with who they’re guarding. That was the inexcusable2 mistake Kyrie Irving made on this play:

These are all important components to transition defense that are not just about effort — they are about knowledge and habits too. But lack of effort in transition is still a cardinal sin, one the Cavs were frequently guilty of in this series, as seen in all of the previous examples. And there are plenty more:

Effort is not solely about the will to win, something that can shift based on the magnitude of the game. The effort a player gives in transition defense is determined by, among other things: what kind of shape they’re in, how much energy they’re devoting to their other responsibilities, and whether there’s a consistent coaching emphasis placed on it. It, too, is about habits — habits honed over the course of a season and a career, habits the Cavs were lacking when they needed them most.

But Maybe They Are

Cleveland’s five point margin seemed poised to widen at the start the 4th quarter of Game 3. LeBron and Irving were on the court while Curry and Durant rested. “This is a big time for both teams,” Jeff Van Gundy noted on the broadcast.

As he was speaking, Draymond Green ripped down a rebound and immediately flipped an outlet pass to a streaking Ian Clark who took two dribbles and hit Klay Thompson in stride for a dunk. Van Gundy emphasized transition defense greatly as a head coach3, so the disappointment in his voice was no surprise: “and you give up transition.”

The Warriors went on to score 12 more points in transition in the quarter to complete their comeback and all but seal the series with a stunning Game 3 win.

It’s the Finals. A pivotal Game 3. The season is on the line. If there was any time that the Cavs would ramp up their effort and play transition defense to the level they needed to, it would be then. And yet it didn’t happen.

Why was Irving jogging and out of position so much? Why was Kevin Love’s effort level in transition such that Van Gundy felt the need to declare, after one particular example of subpar transition speed: “You can not trot back. If you want to win, you have to get ahead of the ball with an all-out sprint on every possession”?

In a game of this magnitude it can’t be due to a lack of caring. It must be something else. Maybe they’re not in good enough shape to expend the necessary energy to both play proper transition defense and do what they do on offense. It’s possible they are just physically limited: not big enough or fast enough to consistently impact those plays. Perhaps they just have never learned or internalized the basic principles they need to, and so they had no habits to fall back on when fatigue set in.

It’s this last theory that gives Cleveland real hope. If it’s a matter of coaching and emphasis then they can make transition defense a true priority next year and close the gap between them and the Warriors significantly. The Cavs’ problems might be solvable without roster changes — they might not be personnel problems.4

But maybe they are. I like to divide players’ defensive issues into three categories: “can’t”, “won’t”, and “doesn’t know how”. Some players are negatives defensively due to physical limitations: they might be too small or have short arms or limited quickness. That’s “can’t”. Some players hurt their teams because they just won’t defend: they don’t care enough about that end of the floor or don’t want to deal with the physicality or aren’t in good enough shape. And some players simply don’t have the habits and knowledge to be in the proper spots, to anticipate, to execute.

This framework is helpful because some of these limitations are more changeable than others. A team can’t get a player’s arms to grow. A head coach might be able to impact how much a player cares by emphasizing defense more, and allotting playing time based on performance at that end of the floor, though this doesn’t always work. But a coaching staff at least has a good chance of creating habits through film and practice.

Are the transition defense deficiencies of Kyrie Irving and Kevin Love more “can’t”, “won’t”, or “doesn’t know how”? The closer they are to “can’t”, the more Cleveland will believe they need a personnel change.

As we officially enter the offseason, 29 teams are asking themselves these kinds of questions about their players. How much improvement can come through the growth of those already on the roster? And how much do they need to go elsewhere for? The answers to these questions shape their decisions and their future. Perhaps for no one more than the Cavs.