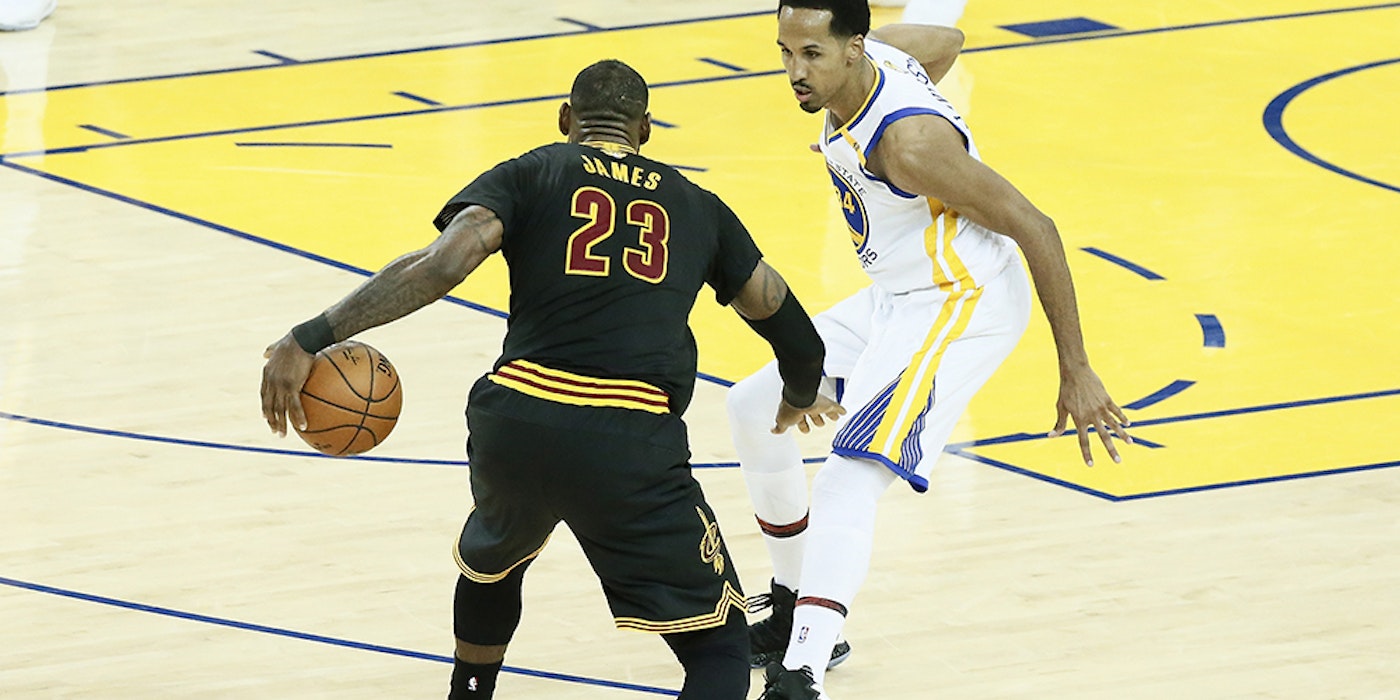 Three keys for Game 3, plus some subtle things you may have missed.
June 6, 2017

By the late stages of the fourth quarter, Games 1 and 2 weren’t in doubt. The Warriors ran and passed and shot their way to a 2-0 series lead in front of a raucous Oracle Arena crowd. The Cavs didn’t look like they could compete with a team many had declared the best team ever.

Though the description fits, I’m not talking about this year’s Finals. The 2016 Finals started almost exactly the same way — and we all know how they finished. These are different Warriors and Cavs teams, and it took a historic comeback to overcome the hole the Cavs dug for themselves last year. But if nothing else, 2016 should teach us not to write off LeBron James’ team after two games. Even two that played out the way Games 1 and 2 did.

What are the keys to watch as the series moves to Cleveland for Game 3? Here are three important takeaways from the first two games — plus a bonus section to highlight a few subtle plays you may have missed.

The transition battle has played out as expected. Golden State had the best estimated transition offense in the league this year1, while Cleveland’s transition defense ranked 28th. There’s no greater disparity in any major stat category between these two teams.

Cleveland played fairly evenly with Golden State in the halfcourt in Game 1 but was blitzed in transition, allowing an estimated 28 transition points per 100 total possessions played and scoring just 6. In Game 2 the gap closed some but nevertheless persisted: 25 to 14 in favor of the Warriors.2

Golden State presents a unique challenge to any team in transition: the Warriors push hard, space properly, and their lethal shooters aren’t afraid to let fly. All of which forces the defense into hard choices. Golden State played two of the top transition defenses in the league in these playoffs — Utah and San Antonio — and while both of these teams eventually did slow the Warrior break, they struggled to do so early in the series. That’s because defending Golden State in transition is unlike defending anyone else. It demands an incredible attention to detail to prevent plays like this one from Game 2:

A lot of the transition play from the first two games is of this same variety: it’s not that the Cavs aren’t getting back adequately — it’s that they’re not getting back completely. And against the Warriors, that incompleteness can often mean failure.

The Warriors force opponents into a devil’s choice on the break: cover the elite shooters or take away the rim. To do both effectively requires fluid communication and perfect decision-making on the fly, something that has to be honed over the course of a season of practice. Cleveland is lacking that, and it has shown:

Standard transition defense principles dictate that the priorities are: (1) protect the paint, don’t let anybody get behind you (2) stop the ball (3) find a man (4) match up properly. The Cavs have been so concerned about the Warriors’ shooting that they have sometimes skipped to the third step, rushing past the first two in an effort to take away Golden State’s transition threes.

Cleveland really struggled to finish at the rim in Game 1, making just 45% of their attempts (compared to their season-long rate of 65%). It would be easy, then, to overlook the fact that they got to the rim at a very high rate: 43% of their shot attempts came around the basket, much higher than their regular season rate of 34%. If Cleveland had gotten to the rim at that rate for the full season they would have led the league.

This is one of the few places Cleveland has an advantage. Golden State doesn’t have high level rim protection outside of Draymond Green, and ranked 20th in the league in preventing opponent shots at the rim during the regular season. Cleveland, meanwhile, ranked 2nd in FG% at the rim and has a historically great rim-attacker in LeBron James.

Cleveland clearly made attacking the rim a priority in Game 2, to great effect. Watch LeBron’s single-minded focus on the rim in the first half, in particular taking note of how many times Golden State is in good defensive position but LeBron puts his head down and attacks anyway:

Cleveland finished the game having attempted 42% of their shots at the basket, another very high rate, and this time converted a solid 61% of those attempts.

But whether it just took too much energy to keep this up, the extremely fast pace of the game got to him, or something else was going on3, LeBron couldn’t sustain this attack for the full game. In the first half he had 13 shot attempts4, all of them attacking the rim. In the second half he had just 7 shot attempts, only 3 attacking the rim. Cleveland came out after halftime trying to get Kyrie Irving and Kevin Love more involved and looking for LeBron less, perhaps to ease the burden. Despite that, James looked absolutely exhausted as he checked out of the game at the end of the third quarter:

Perhaps there is some reason that hasn’t come out as to why LeBron wasn’t operating at the superhuman level we’re used to. But it’s also possible that there is a notable energy gap in these two teams: Golden State can play even with Cleveland without going full throttle, while the Cavs have to put everything they have into the game to keep it close. And eventually that catches up with them.

As well as Cleveland has done getting shots at the basket, Golden State did even better in Game 1: 46% of their attempts were at the rim, even higher than Cleveland’s rate. At the end of Game 1, Jeff Van Gundy identified help defense as a key for the Cavs to improve on, after watching mistakes like this throughout the game:

As Van Gundy alluded to, while the Warriors don’t give you many spots to hide, they do have lesser threats on the floor and Cleveland would likely benefit by forcing those players to make plays. This is something San Antonio has always been incredibly good at in the playoffs, and it’s why they played the Warriors so competitively this year before the Kawhi Leonard injury.

Needless to say, the Cavs are not the Spurs: San Antonio was the best defensive team in the league in large part because their execution of help principles is so good. Cleveland, meanwhile, ranked 21st. As with transition defense, this is not the kind of thing you can just start being good at in the Finals — decisions have to be made so quickly that they have to be ingrained habits. The Cavs can emphasize it more, and did in Game 2, particularly early in the game where they helped more aggressively off of Draymond Green to try to take away drives:

This seemed to be effective — Golden State took only 26% of their attempts at the rim in Game 2. Still, there’s only so much an emphasis can do if these actions aren’t second nature to players. The Warriors’ offense is water against a dam: the pressure is immense, and even a tiny flaw can lead to them bursting through. And the Cavs’ defense certainly sprung some leaks:

Plugging those holes will continue to be an emphasis for the Cavs as the series moves back to Cleveland.

(Bonus) You May Have Missed…

A few small items to watch for as the series continues.

One of the ways Golden State has prevented Cleveland from helping properly is by running actions on both the weak and strong sides of the floor simultaneously5. The Cavs’ weak side help is preoccupied with defending off ball screening action and therefore isn’t able to rotate in time if the Warriors’ primary action demands it:

Richard Jefferson hasn’t been used as the screener in pick-and-rolls much this series, but the few times he has have been effective — particularly because of his craftiness in setting screens. He’s kept his defender off balance by not making it clear which side he’s screening on, quickly flipping the side of the screen, creating openings for teammates:

The Cavs had some nice wrinkles in their offense in Game 2 that showed the potential for incorporating more off ball screening action. First, Golden State was very concerned about Kyle Korver getting open off screens, and defended these actions aggressively. Cleveland countered by slipping the screens and got multiple layups out of it:

The Cavs also had a nice after timeout (ATO) play that was almost a reverse Hammer action. Hammer action is named after Darvin Ham, for whom the action was initially created. The action was invented when George Karl drew up a unique kind of play in a timeout: the idea was to throw the ball into Ham in the post as a decoy to occupy the defense and then back screen a player to the opposite corner, where Ham would throw the pass. This style of action has caught on, and variations on it have become popular for teams to run out of timeouts6:

This Cavs’ play is a similar concept: throw the ball into LeBron in the post to occupy the defense, then screen on the back side. But instead of a back screen it’s more like a down or flare screen — thus “reverse Hammer” — and Korver is wide open:

Last year the Cavs lost the first two games by an average of 24 points, and then won Game 3 by 30. Cleveland will need this same kind of cleverness — and a whole lot more — if they’re going to repeat that performance in 2017.