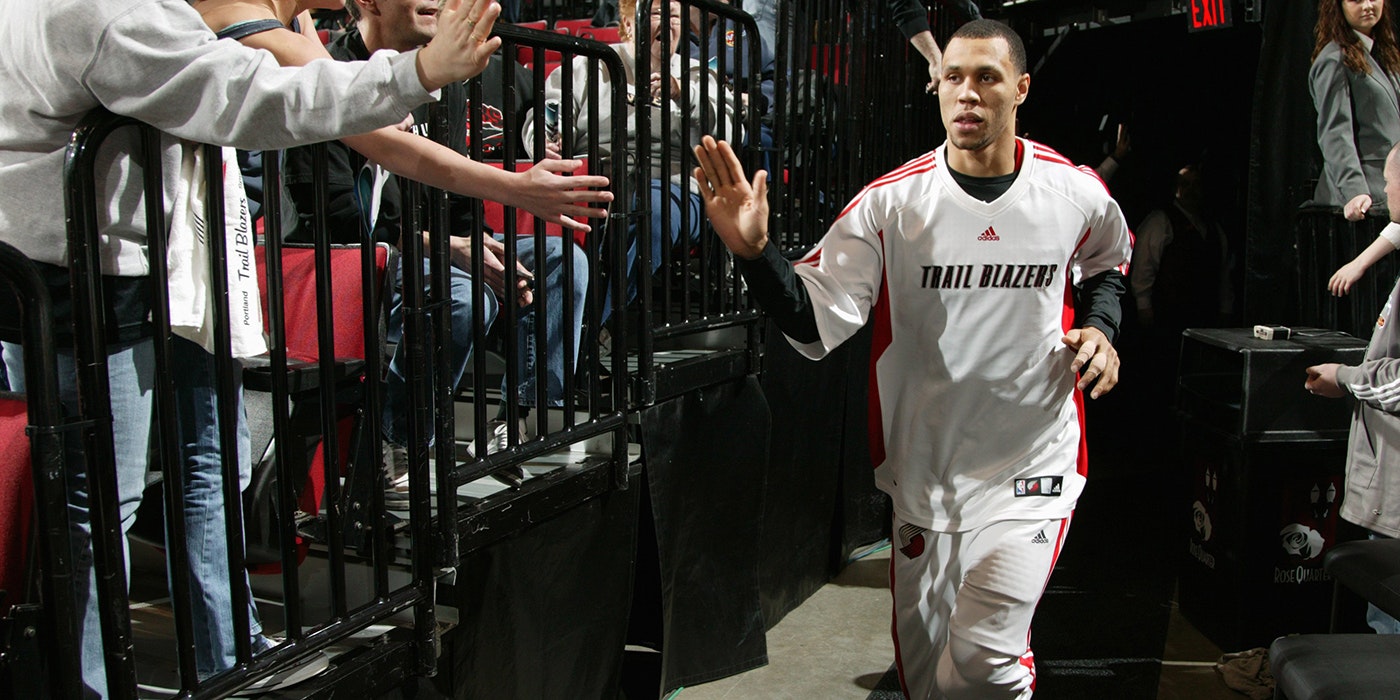 Welcome to the next phase of Cleaning the Glass: Insider. What exactly is Insider? And why did I decide to go this route?
October 16, 2017

I started working for the Portland Trail Blazers during my junior year of college. I was a part-time statistical analyst, and the work that I did could be done from my dorm room at the University of Maryland: collecting and analyzing stats and turning them into reports to help the decision makers out west. It was a few months until, during my winter break, I took the cross-country flight to Portland. The day of my flight the Blazers were taking on the Knicks1, and the team flew me out early enough to attend the game.

My boss met me at the player and staff entrance and took me down the long hallway, past the locker room, brushing players and coaches going through their pre-game paces, to the entrance to the court. I will never forget that moment, stepping out from the darkness of the tunnel into the brightness of the arena, mouth agape, eyes as wide as Kawhi Leonard’s hands, perspective forever shifted.

Now, almost a decade later, so much is different but so much is also the same. I look back on the person I was then and marvel at how little I knew, how much I had yet to learn. I worked for six different General Managers in both Portland and Philadelphia in my nine NBA seasons2. I was part of teams on the way up and on the way down, teams who exceeded all expectations and teams who disappointed, teams building and re-building (and Processing). I drove players from the hotel to the gym for Summer League practice, and sat behind the bench at playoff games. I painstakingly collected stats from film, and built automated tools for the front office and coaches. I rebounded for players getting shots up, and participated in coaches meetings. I felt the heightened tension of a draft room, the disappointment on the team plane after a tough loss, the intensity of a huddle. In that time, I saw the basketball operations of an NBA team from a variety of perspectives, and that experience has unquestionably changed the way I think about basketball.

But my passion for the game has never waned. At heart I’m still the same fan I was when I walked through the Rose Garden tunnel, slack-jawed. I still get childishly impatient every October, as we count down the days until the start of the season. I still revel in basketball’s unique tension between the team and the individual, still delight in the puzzle of attempting to analyze something with so many complex pieces, still hunger to learn more about the game.

And I certainly still remember what it was like to be on the outside, to feel that hunger without being able to truly satisfy it. To tear through the latest books uncovering the behind-the-scenes perspective, to hunt for the few revealing interviews with key basketball decision makers, to seek out any places I could learn more about Xs and Os.

Which is why, after leaving the Sixers last offseason, I decided to create this site. And which is why I’m hopeful that this next step in the site’s evolution, Insider, will be able to provide for fans of the game what I was searching for years ago.

Insider is designed for fans who can’t get enough high-level NBA content. I will continue to write articles semi-regularly for non-subscribers, but for a monthly fee subscribers will get (1) exclusive articles and videos, (2) access to an advanced stats site, and (3) an account at the Cleaning the Glass discussion board.

The Articles and Videos

The articles I’ve written on this site so far give you an idea of the kinds of topics I will cover and the style with which I will cover them: I’ve used video and advanced stats to break down Milwaukee’s defensive schemes and what they tell us about defense in the modern NBA, dived into the dynamics of the Collective Bargaining Agreement and how they affect team decision making using clarifying charts in The Worldwide Leader and the Cap Jump and Cornered Market, and wrestled with how behavioral psychology impacts draft decisions.

During the playoffs, I created short video clips designed to take the complexity of the action on the court and simplify it, revealing aspects of the game you might have missed when you watched it live.

For example, in this clip I showed how LeBron read the Golden State defense to create a wide open corner three for JR Smith:

And in this clip I detailed how the Cavs’ blown switch left Avery Bradley wide open for a game-winning shot:

Insider articles and videos will follow this trend, but they will take even more forms and address more topics: from film breakdowns to thoughts on recent transactions, from scouting reports to answering subscriber questions, from short videos that highlight one or two plays to longer analyses of players and teams. Throughout it all, though, my commitment is to quality above all else — I’m not going to push out content just for the sake of it.

I’ve spent my career trying to figure out the best ways to gather, interpret and communicate stats for NBA decision making, and I’ve used that experience to create Cleaning the Glass Stats.

Advanced stats can often seem confusing and overwhelming to people who aren’t used to them. There’s a lot of new terminology to learn, it’s hard to know what’s good and bad, and it takes time to figure out how to assemble the stats into a coherent picture that improves your understanding of players and teams. Cleaning the Glass Stats aims to solve that with a focus on explanations, ease of use, and context while still providing an incredibly in-depth array of stats, some of which are hard to find anywhere else.

As with any other stats site you might experience a learning curve to using it, but my goal is to make that curve as gradual as possible. I will use screenshots of the site in articles and tweets to show you how I use the site to understand players, teams, and games, and allow you to do the same yourself.

One stats table from Steph Curry’s Stats page. The red and blue numbers compare these stats to the rest of the players at Curry’s position. Check out the in-depth guide to each of these stats.

The game summary of Game 5 of the NBA Finals. The red and blue numbers compare these stats to all of the other playoff games played last. Check out the in-depth guide to the game summaries.

I’ve spent a lot of time building what is on the site so far — but that’s only a start. I will continue to roll out features as we go. I have a lot of neat ideas of things that could be added (e.g. specific filters for the stats, dynamic shot charts, nifty data visualization, player comparison tools, deep lineup data, offseason views, and more). The development of the site will be guided by a combination of both my own experience plus input from subscribers.

I’m pretty excited about the Insider discussion board. I love what Twitter has done for NBA commentary, but with character limits and hard to follow replies and the lack of civility from some corners, engaging in real conversations on Twitter is extremely difficult. That’s where I think Cleaning the Glass Discussion comes in.

If all Discussion turns into is a better than normal comment section for Cleaning the Glass articles and videos, that’s great. But I think it has the chance to be much more than that. I’m hopeful Cleaning the Glass Discussion will be the place to go to filter out the noise and just have great in-depth, thoughtful basketball conversations.

You’ll get all of this for $7.50 per month (or $75 if you sign up for the whole year at once). But for the next little bit I’m having a special introductory offer for those who get in on the ground floor: up until the end of November, a subscription will be only $5 per month (a discount which will last for a full year of renewals) or $50 per year.

And as a way to let you see what all of this is like, for the first two weeks of the season I’ll be opening up the extra content and the stats site to everyone!3 (If you sign up now, you will only be charged after the two weeks are over.)

When you start working for an NBA team, it gets drilled into your head pretty quickly that privacy is very important. Information is a big competitive advantage, so teams don’t want any of that information to leak to other teams or the public. Posting my thoughts on this site and Twitter over the last 6 months, then, has been a complete about-face from what I’ve been used to.

But I’ve really enjoyed it. I’ve enjoyed sharing what I’ve learned, enjoyed being spurred on to investigate the questions of others, enjoyed having an excuse to dive into depths I wouldn’t have had time to plumb otherwise. And I’d love to keep doing it.

From what I can tell by everyone’s responses, you have enjoyed it as well. So that’s where Insider comes in. For all of the reasons laid out at the start, I want the opportunity to use my experience and knowledge to bring great content, great stats and great discussion to fans. My hope is that the subscription revenue will essentially pay me a salary so that I can focus completely on that goal. And if Insider gets enough subscribers that there’s money left over, the added revenue will allow me to invest more in the site — I have lots of ideas that I think could be really exciting (but obviously we need to get there first)!4

Why subscriptions? Why not make it free and rely on advertising? Because, for the most part, an advertising-based business needs to maximize clicks — they get paid based on how many people see the ad, so all they care about is eyeballs. And that drives a certain type of behavior and content: catering to a more general audience, hot takes, lightning rod topics, controversy, argument, click bait.

That’s the kind of site I want to run. I want to be beholden to you, the true fans. I want to write with nuance and depth, to engage with complex topics. I don’t want to chase clicks. I don’t want to feel like I have to churn out content even if it’s below my standards of quality. I want to write about the complexity of decision making in the draft, not yell YOU WON’T BELIEVE WHICH HIGH-LEVEL DRAFT PROSPECT IS GOING TO BE A COMPLETE BUST.

From the beginning, the core values of this site have been: quality over quantity, thoughtfulness over quick reactions, nuance over simplification and a goal that every time you visit this site you come away learning something new. That’s exactly what Insider is all about.

Does that sound like something you’d like? Subscribe here. Know a friend who’d like it too? Send them this article or even buy them 4 months as a gift (use coupon code: INTROGIFT for $10 off the gift price). Have questions for me? Shoot me an email: ben@cleaningtheglass.com.

If you’re even close to as excited as I am about the start of the NBA season, this is a fun week. Hopefully Cleaning the Glass Insider is one more thing that adds to your excitement about this season. I’m looking forward to following it along with you here, and I hope you join me!