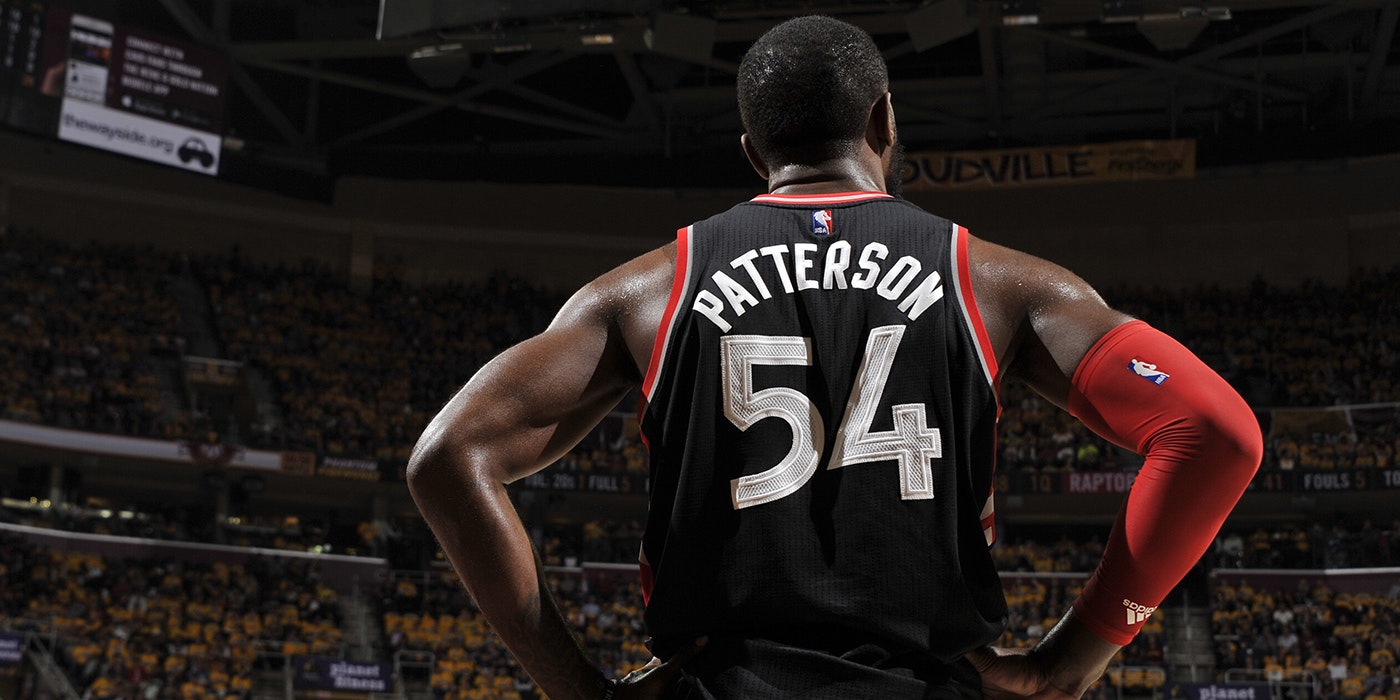 Why don’t the Thunder sign big money free agents? Because the market isn’t what it seems. How max and rookie contracts distort the free agency market and alter the NBA landscape.
July 12, 2017

When Patrick Patterson signed with Oklahoma City last week it was notable for a reason besides what it meant for the Thunder’s performance on the court: as Royce Young pointed out on Twitter, the three year, $16.4 million contract Patterson signed was the largest contract the Thunder have given out to another team’s free agent with Sam Presti as General Manager.

That’s a shocking fact. Patterson signed for only a little over $5 million per season. How can it be that the Thunder have been as successful as they have been over Presti’s tenure without spending more than the mid-level exception in free agency? Why have they seemed to deliberately avoid the free agent market?

This isn’t an accident, or the result of being cheap. The Thunder operate this way because they are aware of a truth of the NBA: free agency is generally not an efficient way to acquire players.

The Winner’s Curse (and other problems)

Three real estate investors are bidding on a building of unclear value. The first doesn’t think it’s a great property and enters a low bid. The second decides it has a lot of untapped potential and enters a very high bid. The third can see both pros and cons and offers something in between. The winner, of course, will be the second investor, the one who values it the most.

But here’s the problem: that investor is also the most likely to have overvalued the property. If this second investor is wrong about their guess that the building has untapped potential they’ll be stuck paying too much. This is a phenomenon known as the Winner’s Curse, where the winner of the bid will be the most likely to have priced it incorrectly. It applies to many types of bidding situations, and NBA free agency is no exception.

The team paying the most for a free agent is the team who values that free agent the most1 — who likely overvalues the player the most. It’s possible that all of the other teams with money undervalue the player and so the winner gets good value. But more likely than not the winning bidder will be the one that overpays the most.

That overvaluing might happen for a number of reasons. Some teams want the instant gratification: they are desperate to improve their team immediately and so they’ll pay a premium to secure a player they think will help. Some teams pay too much attention to what just happened, spending on a player who had a suddenly good season or playoff run. Some overpay to keep their own free agents, falling victim to the endowment effect and thinking more highly of something they already have. Some teams have cap space and feel committed to using it, so as players come off the board and their options for using that cap space dwindle they revise their estimates of how much those remaining players are worth.2

Now, while these problems make it difficult to find good value in free agency, there are problems like this in any method of acquiring players. Drafting and trading also present opportunities to fall victim to these types of mistakes. There’s one big factor, though, that makes free agency particularly challenging: the contract rules of the NBA’s Collective Bargaining Agreement.

The NBA three point line creates a problem. For most of the court there isn’t an issue with tracing an arc 23 feet 9 inches from the basket, but in the corners of the court there would be no room for players to take threes without standing out of bounds. The solution? A bend in the arc where it gets close to the sideline, at 22 feet from the basket, carving out a certain amount of room for players to stand.

While it solves the problem, it creates another: this solution distorts the geometry of the court. There is a spot on the floor where a shooter can get three points while shooting from a distance that would only net them two points elsewhere. While it took teams time to catch on, it’s now common knowledge that corner threes are different from those above the break, and coaches have adjusted accordingly. Offenses and defenses are now designed completely differently to account for this peculiarity of NBA court design.3 Constraints in one area had an unintended consequence in another that fundamentally changed the game.

The same thing exists in the free agent market. The Collective Bargaining Agreement (CBA) has certain rules created for understandable reasons, but which have unintended consequences. Consequences with large ripple effects on the NBA landscape.

The corner threes of the CBA? Maximum and rookie contracts. There is logic behind why these contracts exist: they are a natural deal point between owners who want to control costs and level the playing field between big and small market teams, and an NBA Players Association that tends to vote in a way that helps the majority of its members. Max players are a small minority of those votes, and future rookies aren’t in the union yet.

But understanding why the rules exist doesn’t stop their effects. Effects best explained with this graph: 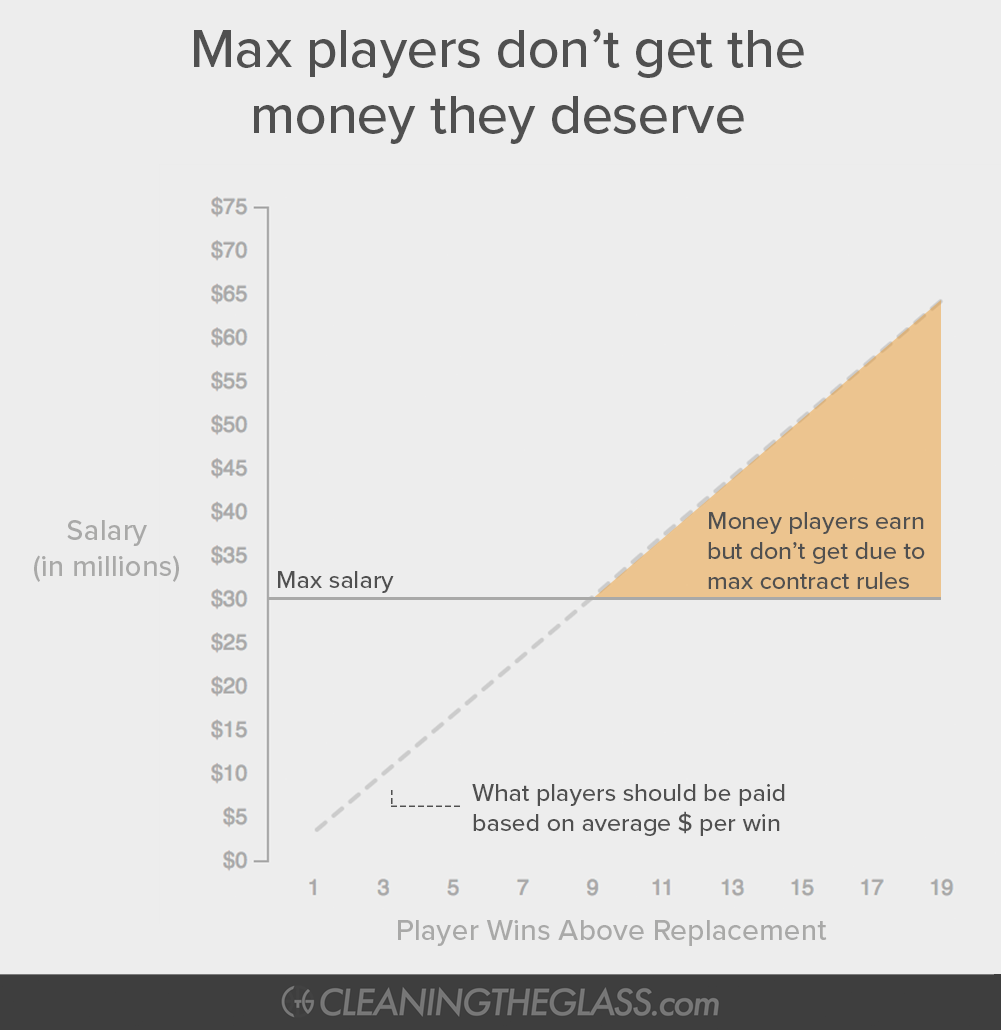 That orange triangle is the part to focus on.4 It represents the amount of money that the most productive players deserve to be making based on their contributions to winning, but which the maximum contract rules prevent them from getting. LeBron, for example, is on the far right of the graph, producing somewhere around 20 wins more than a replacement player each year. By a conservative estimate that’s worth easily more than $50M per year on the open market, but LeBron made only $31M last season, the most the CBA allowed him to make. There’s a cap on his earnings.

This makes the best players in the league even more valuable than they already would be. Basketball is a game that rewards exceptional individual talent more than any of the other major team sports, so teams with stars would have an advantage regardless. But on top of that the max salary rule means those players also have some of the best contracts in the league.

Rookie contracts can have the same impact. In 1994, #1 overall pick Glenn Robinson signed a 10 year, $68 million contract before ever playing a second in the NBA. The owners balked at this, not wanting to have to pony up that kind of money for highly uncertain performance. So they created a rookie scale, where first round picks are paid a precise amount based on what number pick they are.5 But this scale vastly underpays the highest performing rookies, who frequently can have big impacts on their teams’ performance years before their rookie deal is over. As an example: two of the best contracts in the league last year were those of Rudy Gobert and Giannis Antetokounmpo, both of whom produced 10-20 wins above replacement for their teams6 while each making under $3M. 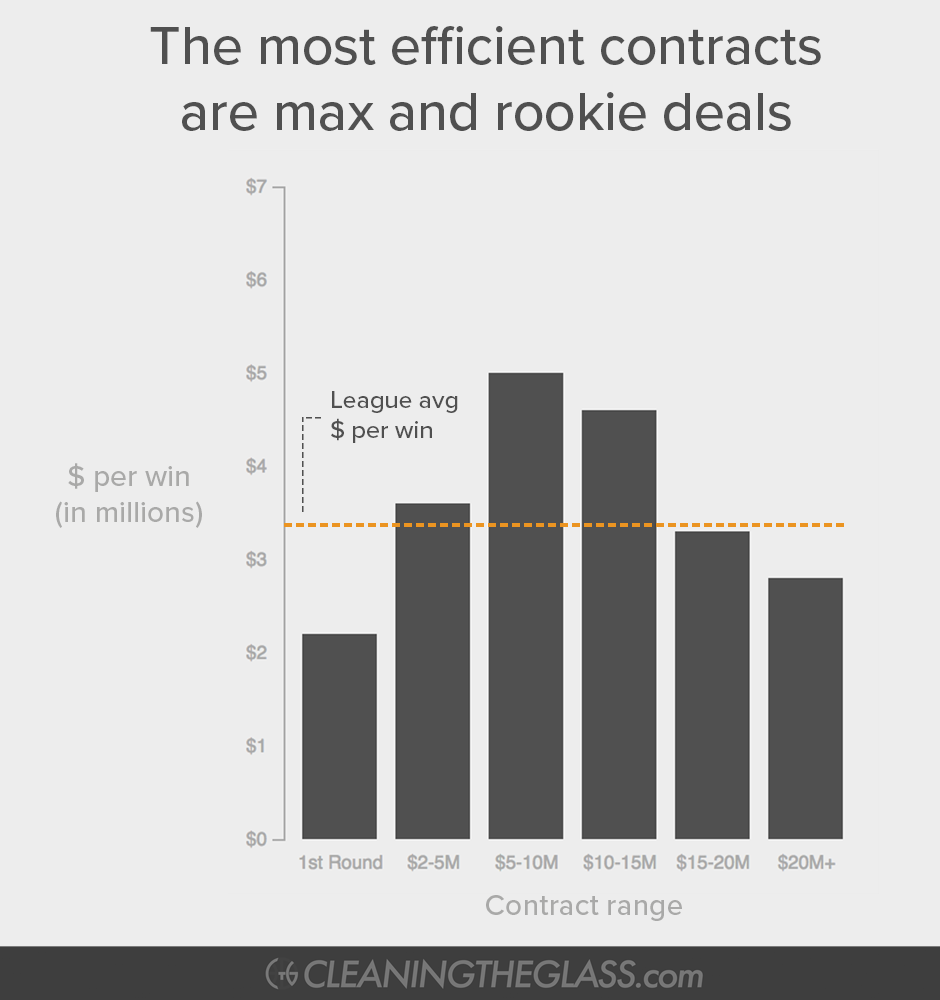 The middle of the free agency market is where teams get the least bang for the buck, while the best investments tend to be on the extremes.7 This doesn’t mean teams should stay out of free agency altogether — there are still ways to find value in the middle of the market. Perhaps a team can correctly identify an undervalued player, or find one that is worth much more to their particular roster than to the rest of the league. Maybe they take a risk on someone with injury problems or personality questions and the player is able to overcome them.

But those are the exceptions. Trying to build a team through free agency is like trying to win a game with midrange jumpers. You can do it — but you’re much better off with corner threes.