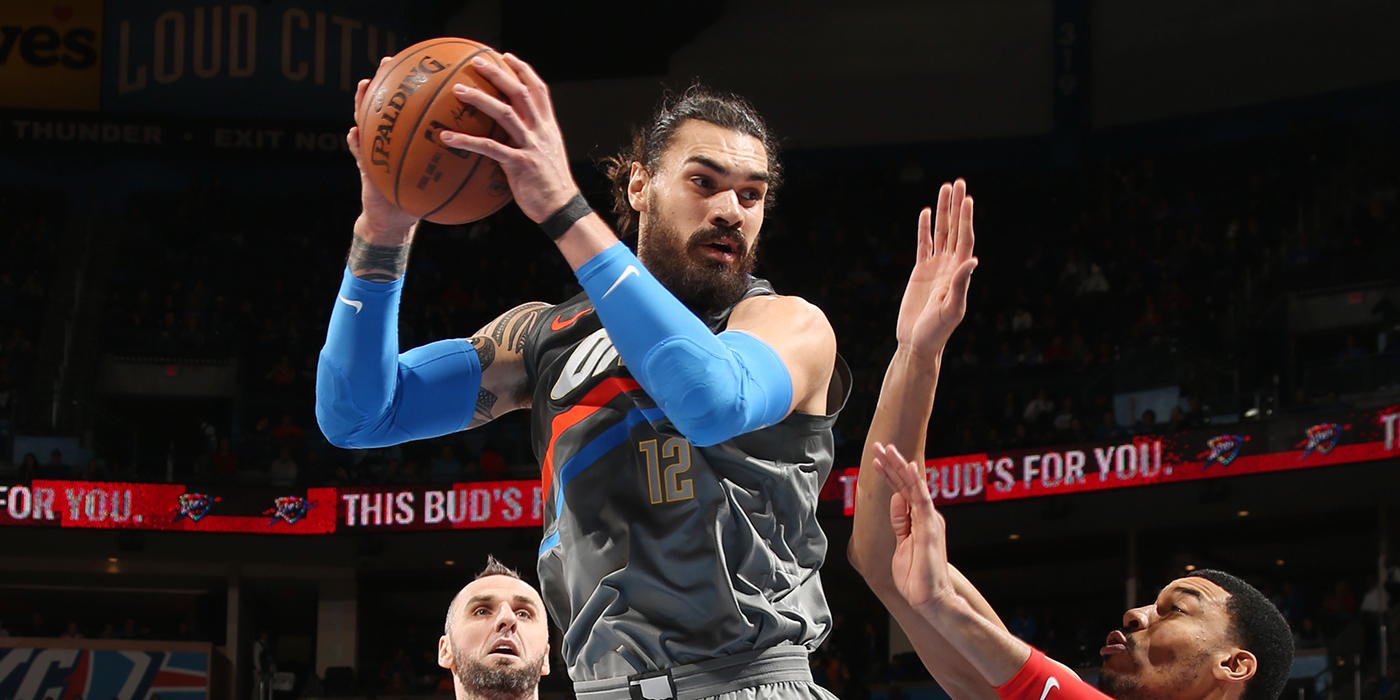 Steven Adams has always been a good offensive rebounder. As a freshman at Pitt he ranked 20th in the country in offensive rebound rate, and in his rookie season he ranked on the 95th percentile for big men in percentage of his team’s missed field goals he’s vacuumed in. This year, though, he’s taken that to new heights.

On the Cleaning the Glass Stats site, I differentiate between rebounds off of missed field goals and rebounds off of missed free throws. There’s a good reason for this: those are two very different rebounding contexts, so they need to be evaluated separately. Oftentimes free throw rebounds aren’t even contested, and are simply collected by the biggest defender under the basket. They are some of the easiest rebounds for players to grab and pad their stats.

But Adams is an exception. This season the king-sized Kiwi wears both crowns: among players with more than 250 minutes played, Adams has both the highest offensive rebound rate on missed field goals *and* missed free throws. He’s gotten his mitts on 1 out of every 9 free throws the Thunder have missed when he’s been on the court. This isn’t a fluke. Last year he scooped them up at about the same rate, and the year before he was at around 1 in every 11 (95th percentile for big men).

In the second quarter of Oklahoma City’s recent game against Brooklyn, Adams demonstrated the timing, arm strength, and wrestling-style moves he employs to be so effective in these situations. Watch him turn the tables on Jahlil Okafor, leveraging Okafor’s box out effort against him, dipping his shoulder and then tossing Okafor aside like a teddy bear:

The Nets were so concerned with Adams’ free throw rebounding, they took their power forward, normally stationed on the opposite block, and put him on the same side as Adams, hoping that if they could sandwich Adams between their two largest players they could hope to contain him. Not only did it not really work, it allowed Carmelo Anthony to take advantage of having Joe Harris, a wing, box him out and secure a rebound himself.

That swim move under the basket Adams used in this clip is one of his most effective tactics. He catches the defender leaning into him, thinking they have him sealed, and then he dances around them, using his inside hand to shove them out of the way just enough without drawing the eye of the refs. Watch him make this work again and again, sometimes in big moments, and even against Nene, one of the best box out artists in the league:

As long as we’re on the subject of Adams’ free throw rebounding, we have to mention the other end of the floor as well, because it’s just as remarkable. As high as Adams’ free throw rebounding rate is on offense, it’s that low on defense. Adams has grabbed opponent free throw misses at a rate of only 1 out of 33. Not only is this more than three times lower than his rate on much more difficult offensive rebounds, it’s not anywhere close to that of other high-level rebounding big men. Andre Drummond, for example, has rebounded over half of all opponent missed free throws in 4 of the last 5 seasons. (You can find these numbers in the “Defense and Rebounding” section of the Cleaning the Glass Stats player pages. Scroll to the bottom of Drummond’s profile, for example.)

The reason? Because Steven Adams takes the Robin Lopez mentality, detailed in a recent Friday Film, to the extreme: sealing off his man and letting a teammate get the rebound.

To Lopez and Adams, box score stats don’t matter. Winning does. That’s why, as Zach Lowe observed on Twitter, Adams is on pace for a bizarre statistical line:

Triple doubles from point guards get a lot of attention — and rightly so. But let’s not overlook the 7-footer subverting his own ego to enable it.