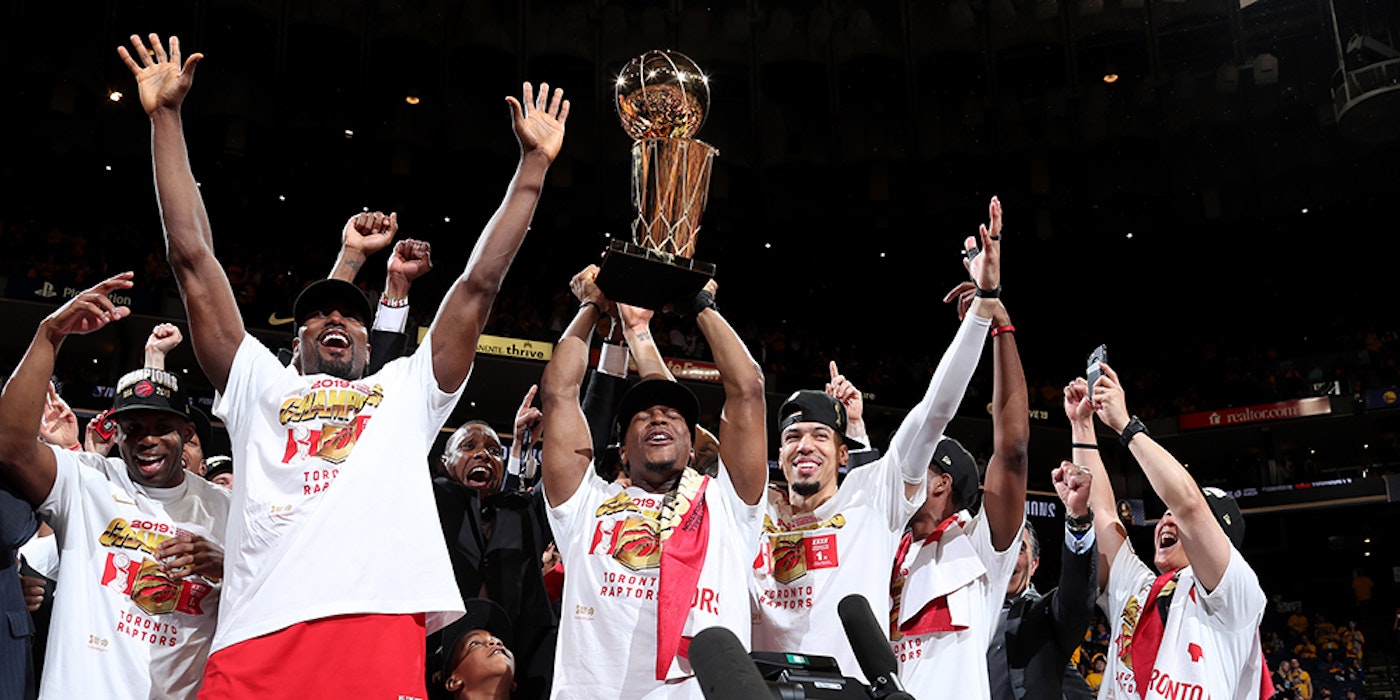 How did the Raptors pull off such a surprising championship run? Because, among other things, they were incredibly adaptable.
August 1, 2019

Every now and then, someone takes a topic you’ve been thinking about and reframes it in just the right way. It doesn’t have to be anything revolutionary. Sometimes, like when a child is trying to put a square block into a square hole but has it turned the wrong direction, just shifting the angle a few degrees makes everything fall into place.

That’s how it felt to me when, in the first chapter of David Epstein’s incredibly thought-provoking new book, “Range,” he introduces the concept of “kind” vs. “wicked” learning environments. The psychologist Robin Hogarth, Epstein explains, noted that the skills we need, and the way we should learn those skills, changes depending on what we’re trying to do.

In a situation that is predictable, where we get immediate and accurate feedback, it takes one approach. These are “kind” environments, in Hogarth’s words. Think about shooting a free throw: it’s basically the same every time, and you immediately know whether you make it or miss it and whether you missed to the left or too short.

On the other hand, we have situations in which the dynamics are always shifting, and we don’t get feedback for a long time. These are Hogarth’s “wicked” environments. Think about scouting players for the NBA draft. Scouting involves projecting how a teenager will develop as a basketball player as the competition level increases and their life undergoes a radical change. It is a difficult task made harder by the fact that the game itself is always evolving, which can change the value of different types of players. And some players take a long time to develop, meaning you don’t even find out if your projections were correct for many years. Not to mention you don’t really know why you got it right or wrong. Would Kawhi have been Kawhi if he wasn’t traded to San Antonio on draft night? It’s not the most wicked of environments, but it’s pretty darn wicked.

Now, take someone who has never touched a basketball before and teach them to shoot free throws. How many hours of practice will it take before they can become a passable free throw shooter? You can probably count it on one hand. Take that same person and try to make them a basketball scout. How much time would it take them to become passable at projecting NBA player futures? That time is measured in years. Hours vs. years is the difference between a kind and a wicked environment.

Imagine if I tell you that in a room there’s a task you need to complete, and you have a choice of two tools: either a hammer, or a baseball bat. The hammer is a specialist’s tool. The bat is the generalist’s tool. If you’re going to be asked to drive in or remove nails, you’ll wish you had chosen the hammer. But you can accomplish far more with a bat. You can reach something on a high shelf, or use it as a support in something you’re trying to build. If I tell you ahead of time that the task will involve nails, you’ll choose the hammer. If you know nothing about what is going to happen, you want the bat. In kind environments, those that are predictable, you want specialization. In wicked environments you want generality, you want range, you want to be prepared for anything.

Compared to most situations in life, basketball is fairly kind. It’s a game with set rules and repeated actions. As Epstein writes when comparing tennis and golf:

Compared to golf, a sport like tennis is much more dynamic…But tennis is still very much on the kind end of the spectrum compared to say, a hospital emergency room…The world is not golf, and most of it isn’t even tennis. As Robin Hogarth put it, much of the world is “Martian tennis.” You can see the players on a court with balls and rackets, but nobody has shared the rules. It is up to you to derive them, and they are subject to change without notice.

That is why we often approach learning to play basketball as a kind task. We stress repetition, grinding out hours in the gym, and shooting thousands of shots.

And yet, basketball has its wickedness. It is not a game of shooting free throws. It involves a complex interplay of teammates and opponents, played by athletes with such size and speed that actions and reactions have to take place in split seconds.

No, basketball is not entirely kind. At its highest levels and in its most important moments, basketball requires range.

It feels like the basketball world collectively moved on from the Raptors’ championship much faster than I remember happening after previous titles. Maybe that’s just the age we live in, where the speed of information has increased so much that there’s always something else to pay attention to. Perhaps it’s a result of the Kawhi Leonard shaped hole on Toronto’s roster, depriving the Raptors of a true title defense. But whatever the case, I think that’s doing us, as basketball fans and analysts, a disservice. There’s a lot that Toronto’s victory can teach us: about intelligent risk taking in a winner-take-all sport; about the value of putting yourself in position to take advantage of luck breaking your way; and about the kind of roster building and coaching that it takes to win a title.

If you followed along with my writing throughout these playoffs, there was a theme that kept popping up: the value of flexibility in the postseason. As I wrote after the Raptors beat the Bucks:

That’s simplifying, of course. You can never change anything completely from round to round. The core schemes and habits that have been practiced all year still make up the skeleton of a team’s playoff performance. But rosters and coaches that can’t adjust to their opponents in the playoffs are fragile. They are vulnerable to the wrong matchup. Teams that have schematic flexibility, meanwhile, can mold themselves into a weapon perfectly suited to find the chink in their opponents’ armor.

Nobody exemplified that more this year than Toronto. Nick Nurse and his staff did exactly what they needed to, bending when necessary and remaining stubborn when it was called for. They were able to shape-shift on the fly, adapting the team’s strategies to give them the best chance against their opponents. The Raptors’ victory against Milwaukee was possible because of how Toronto altered their defense to take advantage of the Bucks’ few weak points. On offense, meanwhile, the Raptors continued to shoot the open shots Milwaukee gave them even when those shots didn’t fall for the first few games.

When we look back on the Raptors’ run, though, I have a feeling the most memorable coaching move will be from the Finals: the box-and-one. Despite being used for only a small portion of the championship series, it drew so much attention because of its novelty: few, if any, observers can remember it being played in the modern NBA. The box-and-one became a story of great coaching, starring an unconventional thinker dialing up the right defense at the right time.

No, the box-and-one didn’t win the Raptors the title, but it is a great example of what did: their strategic flexibility. And I don’t mean this just from a coaching standpoint. For all of the attention the box-and-one got, not enough attention was given to the fact that Toronto’s players were actually able to execute a scheme they had not played all season, maybe not even in their careers, on the biggest of stages.

With different players, switching to a defense like the box-and-one in the middle of the game would have been incredibly risky. Players need time and practice to hone the habits necessary to properly execute different schemes, so even if constantly changing defenses might be the right move in theory, in practice the best teams don’t make enormous adjustments from game to game. But when Nick Nurse drew up a box-and-one in the huddle, the Raptors executed it. Marc Gasol didn’t worry about his new responsibilities as much as he relied on his instinct, continuing to rotate properly and protect the rim. Kyle Lowry helped in and then flew out at shooters. Fred VanVleet clamped onto Steph Curry and never let go. Kawhi swooped in to snatch rebounds out of his zone.

This was true throughout their playoff run. To be as successful as the Raptors were in these playoffs requires not only an incisive coaching staff and a willingness to experiment, but players that are flexible. Players that have range. Toronto’s roster was full of players with uncommon basketball intelligence and savvy, players with varied skill sets, players with experience playing for different coaches and playing in different schemes. They were basketball generalists. So when the Raptors wanted to do something different, they could count on those players to execute, no matter how little they had practiced the new scheme.

This is part of the theory behind the games-based approach to basketball training popularized by coaches like Brian McCormick. Their argument is that the biggest reason skills don’t translate from practice to games is because traditional drills treat basketball like a purely kind environment, one that is repetitive and predictable. That works—until the game gets wicked.

When Draymond Green talks about the difference between 82-game players and 16-game players, he’s in part talking about the difference between players who have skills suited for kind environments and those who can survive, maybe even thrive, in wicked ones.2 Because it’s possible to win big in the regular season by being consistently good at what you do, by specializing. The regular season is kind.

But the playoffs are wicked. To win in the postseason requires having a coach who can make the right adjustments and players who can execute those adjustments. It requires a roster full of players with range. A roster like the Raptors’.