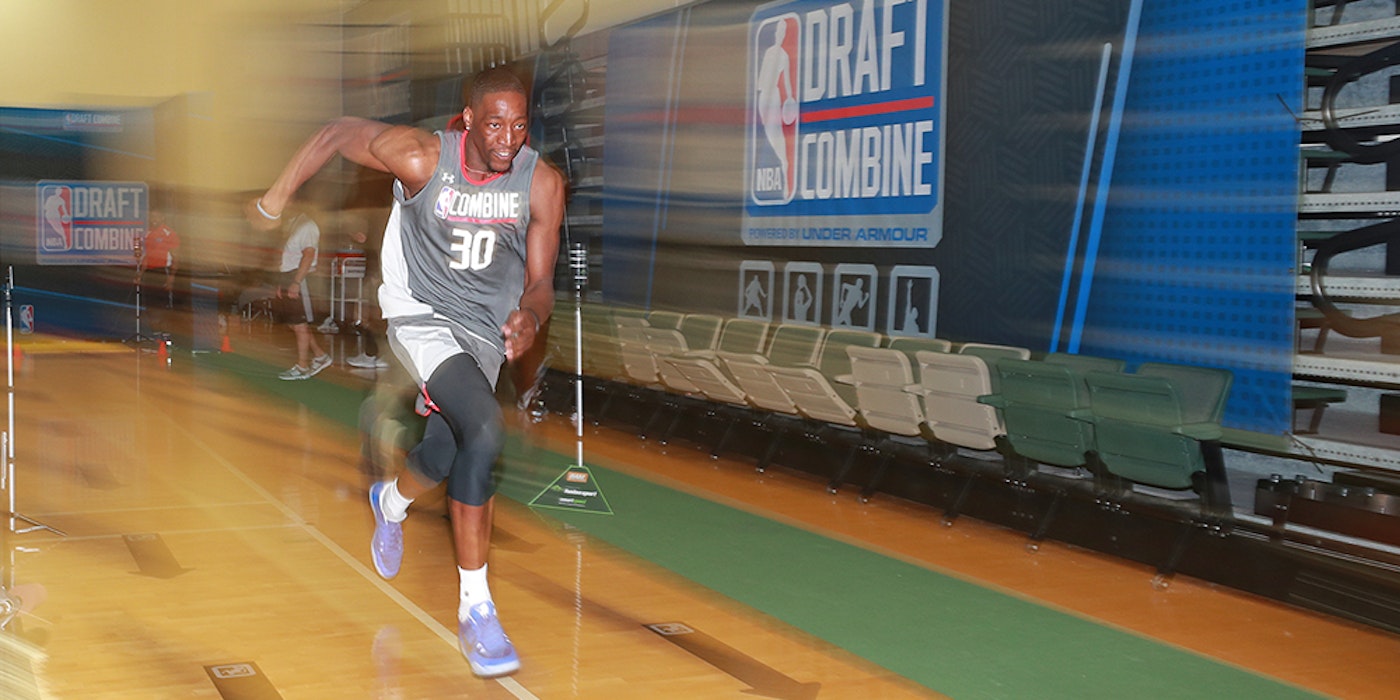 As NBA teams descend on Chicago for the Draft Combine, they’ll get a rare look at prospects. But as they gather information, it’s critical that they also recognize the limitations of what they learn.
May 17, 2018

Walk into the Palmer House, a historic, upscale hotel in downtown Chicago, on the morning of the NBA Draft Combine, and you’ll find a surprising scene. Packed into the lobby is a who’s who of NBA management along with draft prospects in various types of attire (from team polos to tailored suits) and various states of nervousness (from dry-mouthed to insecurely cocky). Team employees break the ice by exchanging pleasantries and commiserating over the annual annoyance of waiting on elevators that are too small and too slow to service the rush, joking and grousing with the prospects.

Once ferried to the proper floor, teams and players have to find their assigned room — no easy feat in the labyrinthine Palmer House. Getting lost is a rite of passage for team employees and prospects alike. It’s perfectly common to be wandering around the hallways on the way back from the bathroom, squinting at door numbers, trying to remember whether to make a right or a left, only to bump into a gangly young man in a suit doing the same thing.

Once everyone is settled in, the interviews come fast and furious. Teams get half an hour with each prospect they requested to speak with, sessions that are stacked back-to-back with the occasional break. That half hour can feel way too short or way too long depending on the player.

Why? Because player personalities run the gamut. Some players are brash, some are humble. Some know all the right things to say and some have no filter. Some are sharp and some dull. Some speak a lot and some say little. And at the end of that half hour you sit and ask yourself: did you even learn anything?

The questionable predictive power of interviews is not unique to basketball. Studies from the corporate world suggest unstructured interviews of the type most teams conduct at the Combine have a fairly low correlation to job success. As Laszlo Bock, the former head of hiring at Google wrote in a Wired article:

[M]ost interviews are a waste of time because 99.4 percent of the time is spent trying to confirm whatever impression the interviewer formed in the first ten seconds…Equally worthless are the case interviews and brainteasers used by many firms…They have little if any ability to predict how candidates will perform in a job.

In basketball, where performance has less to do with traits that are personality-based than in a service sector job, these interviews matter even less. They probably can help, but only if done well and weighted properly. And doing that is very difficult.

It’s difficult in part because it’s hard to really get to know someone in half an hour; in part because determining how much personality matters relative to physical attributes, acquired skills, and past performance is exceedingly tricky; and in part because the context of the interview is so different from the context of a player’s day-to-day life, and what their world will be like as an NBA player.

That last point is the one I want to focus on, because it addresses a factor that contains much of the power and much of the danger of the NBA Draft Combine: context.

When our scouts came back to Portland from the 2012 Combine, there was one player they were buzzing about: Meyers Leonard. Leonard had been considered a mid-to-late first round prospect, but to hear tell of it from those in our front office who had flown to Chicago, he had shown a lot that made him far more interesting than the in-season scouting had indicated. Leonard had measured at 6-11.75 barefoot and more importantly, he had shot the ball very well. In spot shooting drills he had nailed shot after shot, showing great mechanics and displaying a skillset he hadn’t been allowed to demonstrate at Illinois. Leonard had shot just 1 for 11 from three in his sophomore season, and made only 73% of his free throws. But based on his performance in Chicago, it was clear to our front office that he had a much better stroke than the numbers would suggest.

This is a big part of the value of the Combine: it decontextualizes. Players can be put in different or more isolated settings, like jump-shooting drills or 5-on-5 scrimmages, and show scouts more about how they play outside the context of their college team. There is context to these drills and games, too, of course. They are playing with teammates they may never have played with before and are playing for their draft stock. Plus the samples are small: a hot shooting day may be a real demonstration of prowess or just a well-timed fluke. But there is still an advantage to seeing players in a different setting than you’ve otherwise seen them.

Scouting at the Combine is a constant battle of trying to separate context from results. Because of these factors you can’t gain much information scouting traditionally. But there are little pieces of information to be gleaned by coming into Chicago with focused questions that can be answered with the shift in context provided by the Combine.

Measurements are the third prong of the event, and they are the ultimate decontextualizing tool. Measurements take the prospects out of the realm of basketball and just tally what the NBA calls anthropomorphic traits and strength and agility drills. These include height, wingspan, standing reach, hand size, vertical leap, shuttle run, and more.

In theory this allows you to drill down to the raw physical tools that help the player perform on the court. It lets teams strip away the context of the game, strip away the need for decision making, ignore skills like shooting and dribbling, and just view the player as an athlete.

There can be real value to these measurements, helping to understand what can change with time and what can’t. A player is unlikely to grow longer arms, for example. He is more likely to be able to learn how to anticipate the ball off the rim for a rebound. But these measurements have their own context: players learn tricks to increase performance on the agility drills; vertical leap is not a static trait; and there is always the chance for measurement error.

On the other side, though, these measurements may be too decontextualized. How much does vertical leap matter if it’s not functional on a basketball court? If a player can’t react fast enough, doesn’t play hard enough, and doesn’t have the skill to take advantage of his physical gifts, all the athleticism in the world is for naught.

In this way, the Combine is really a microcosm of the entire draft process. It’s what scouts have been doing for the whole year, trying to determine what about a player will shift with time and context, and what won’t. Will he become a better defender if he’s taught by our coaches? Will he be a better athlete when he gets in an NBA strength program? Is he already more skilled than he’s been allowed to show?

That was the challenge with Meyers Leonard. Here was a 7-footer that seemed to have a much better shot than he showed in college, with the athleticism to dunk from a step inside the free throw line. He was a polished interview, an intelligent and well-spoken young man who talked about wanting to do the dirty work and putting the team’s performance above his own stats.

Our scouts were right about Leonard’s shooting: despite underwhelming college statistics, Leonard is a career 37% three point shooter and 82% free throw shooter. Those drills told us something. But Leonard has never been able to translate all of his raw abilities onto the court. For whatever reason, when he’s in the game he’s just not able to use his skill and athleticism and intelligence in a way that positively impacts winning.

The story of Meyers Leonard illustrates a lesson we’d all do well to keep in mind at this time of year: a star at the Combine doesn’t mean a star on the court, because performance in each place is shaped by a very different context.