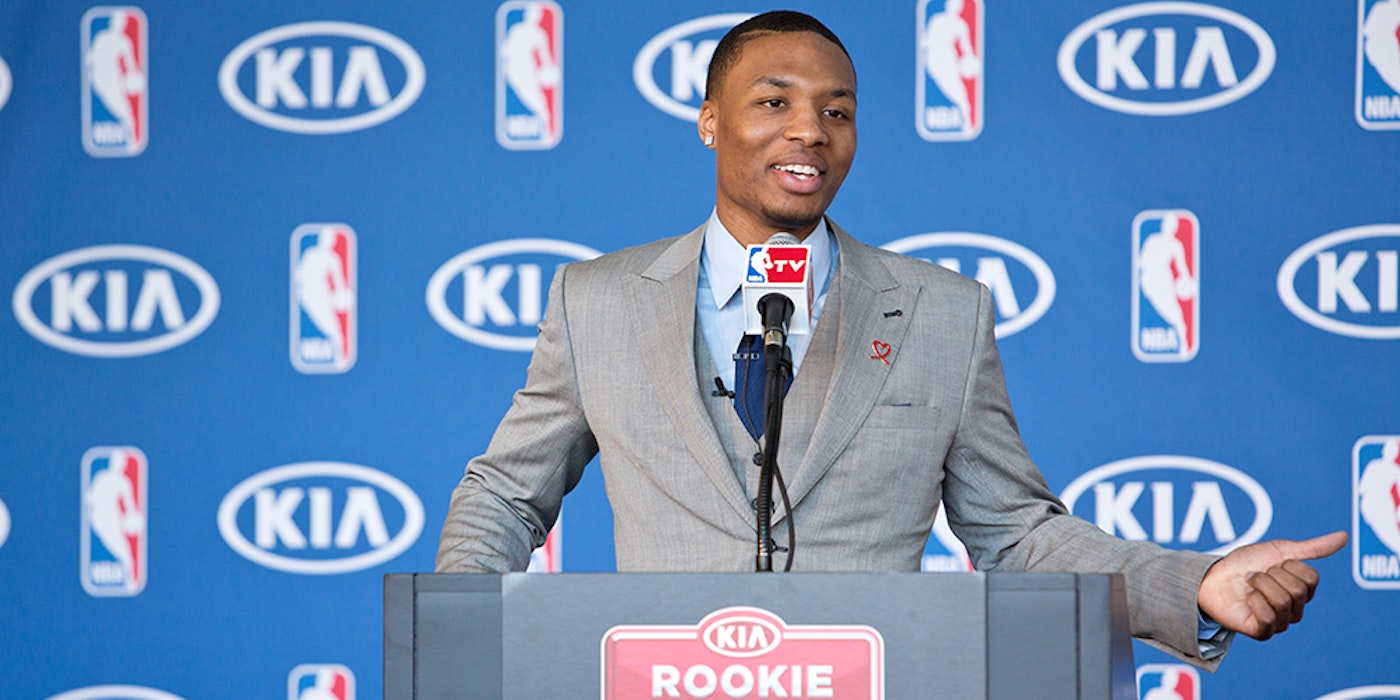 Announcing important changes to Cleaning the Glass: I’ll no longer be writing articles for subscribers—when I have something to say, it will be free to everyone. I'll be spending most of my time on the stats site instead.
June 13, 2019

In the summer of 2013, Damian Lillard wasn’t yet the Damian Lillard we know today. He hadn’t yet made four All-NBA teams (and counting). He hadn’t yet hit two walk off, playoff series game winners. Shoot, he hadn’t even made the playoffs. But he had come off a great rookie season, one that earned him the Rookie of the Year award. For a player who just one year earlier had been playing in the semi-obscurity of Weber State, that was a big change.

Not that you could easily tell. When he came back to the Blazers’ practice facility after some time away at the end of the season, he didn’t act any different. His work ethic wasn’t changed. He didn’t have a big ego. He was the same mature, level-headed, down-to-earth person we met when he first stepped foot in the practice facility for a draft workout the year prior.

But that doesn’t mean he wasn’t feeling the effects of his sudden rise. On his first day back, I was in the gym when Dame walked in, dapping up teammates and staffers. There was the usual small talk and chit chat, the same way anyone would when seeing a coworker for the first time after a vacation. But there was one exchange that struck me, one I’ve remembered ever since.

After greeting one of the members of our front office, Dame looked at him and asked: “Do you remember that quote about success you told me last year?”

“Of course, yeah, that Tennessee Williams quote I love: ‘Success and failure are equally disastrous.’”

I started coaching high school basketball this year at a small private school, and one of my immediate struggles was how to determine whether I was succeeding. You couldn’t judge success by wins and losses, because winning wasn’t really the goal—or at least not the only goal. I wasn’t at a school that was valuing wins above all else, nor was I coaching to burnish a resume or try to rack up a high win total. I was doing it to teach the game that I love, to push myself in ways where I could learn and grow, and to have fun.

But when the team struggled early in the year against some talented opponents, I didn’t feel like I was succeeding. It is so drilled into us that winning is the ultimate barometer of success in sports that how we feel about a game, even one that doesn’t have any real stakes, is hugely impacted by the final score.

While I was tangling with how to feel about my coaching, I was struck by the parallels to my main work, running Cleaning the Glass. Viewed through conventional metrics, Cleaning the Glass has succeeded beyond what I really thought possible over its first two years of existence. Before I started, I thought I might struggle to make the site financially viable, but I haven’t had to worry about that at all—thanks to all of you who have supported me along this journey. I have thousands of enthusiastic subscribers and Cleaning the Glass has been successful. Financially at least.

But evaluating the success of Cleaning the Glass based on the money it makes is like evaluating the success of my coaching based on how many games the team won. Sure, it’s part of what you want to happen, but it’s not the goal. And yet, that’s what society often defines as success. It’s easy to measure. There’s a simple number and it tells you good or bad. When people want to know how you’re doing, that’s what they ask you about. You can get swept up in it so easily, and pulled off the right path. Achieving this kind of success can be, in the words of Tennessee Williams, disastrous.

That kind of success was never my goal. When I started Cleaning the Glass, I did so for many of the same reasons I started coaching: to have fun teaching about a great game, to learn and then share the results of that learning.

My current setup is close to achieving those goals. I have really enjoyed writing about these two NBA seasons, studying the league in-depth and then sharing what I’ve learned. But a subscription business that relies on me constantly producing the next article limits me in important ways. And so, in that sense, this arrangement is not succeeding.

One way I’ve felt this clearly: the pull between working on the stats site and writing. The stats site has been embraced by everyone from fans to NBA front offices to writers from some of the biggest media outlets to coaches to podcasters to agents. And yet there’s still so much more I can do with it. While writing consistently, though, my time is just too limited to keep building it out at the pace it deserves. But splitting my time doesn’t work well either: I can’t be both the best writer I can be and the best web developer I can be simultaneously.1

After a lot of careful thought, then, I’ve decided to change things around here a bit. I’m no longer going to write articles for subscribers. Instead, I’m going to spend the majority of my time making Cleaning the Glass Stats the best site for advanced basketball stats on the web, making it as understandable and easy to use as possible.

To that end, in preparation for this change, I’ve re-designed the site to make it clearer and easier to use in some important ways. You can check it out here. And that’s just the beginning. I’m going to keep pushing on building out new features and finding ways to help visitors learn to use and get the most out of the stats.

I also have some ideas for longer-term projects to teach the game that I haven’t yet had the time to work on because of the need for constant writing. I think you’ll like what comes out of that work as well.

So here’s what this all means, practically speaking:

If you have any questions on any of this, please don’t hesitate to reach out to me either via email or in the Discussion section.

What success Cleaning the Glass has achieved to this point is only possible because of you, the readers who vindicated my belief in a real desire for nuance and deep thought about basketball. I know this change will disappoint some of you who looked forward to my frequent articles, but I’m hopeful that the change will, in the end, free up my time to work on larger projects that you’ll enjoy even more.

Thank you for your continued support on this journey, as I try to achieve a true and lasting success building, learning, and sharing.