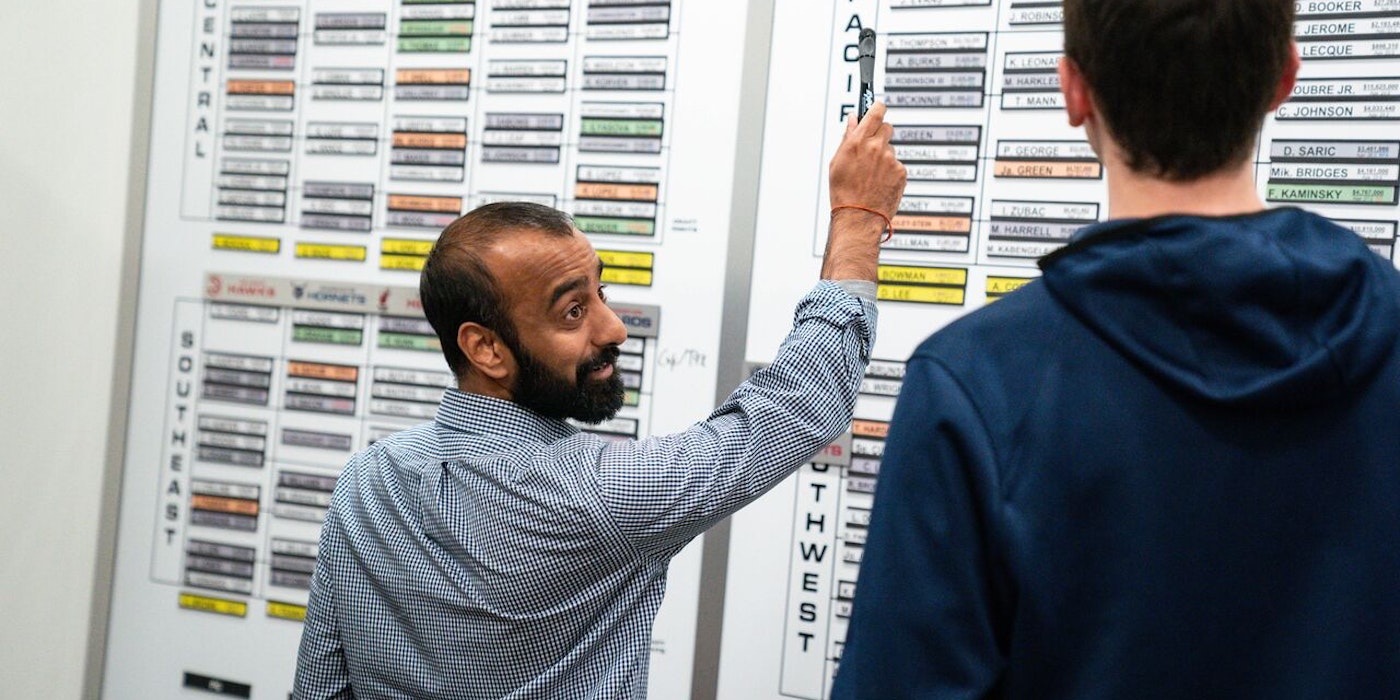 Leader of the Pack

How Sachin Gupta, the Timberwolves new head of basketball operations, taught me that leadership doesn’t always look like we think it does.
September 27, 2021

When Sachin Gupta first showed up in the Sixers offices in the summer of 2014, I’m not sure everyone really knew who he was. Most had met him before—he had spent the last season consulting for the team while he finished up his MBA, and had been in and out of the offices during that time. But before his new title, VP of Basketball Operations, had been announced, I don’t think anyone who talked to him would have guessed they were talking to the #2 person in basketball operations.

Sachin just didn’t give off that air. He didn’t act or talk in a way that made anyone else feel beneath him. He didn’t convey any sense of his own importance. He wasn’t always in a rush to be somewhere. He didn’t talk over anyone else and he didn’t talk about himself. He didn’t assert authority. He didn’t even have his own office for his first few weeks full-time—he just sat in the open office area with scouts and player development staff and interns. In an industry not exactly known for its small egos, Sachin was a breath of fresh air.

That wasn’t an act, either, or temporary behavior as he adjusted to a new team. That is just Sachin. His humility is real, and deep-seated, not the kind that so many feign to be polite.

I have to admit, when we first started working together, it threw me off. I knew he was very smart, but I’d never met anyone who kept their intelligence so quiet. We’d be having some discussion, I’d be blabbering confidently about some half-formed opinion, and Sachin would be listening, thinking, asking questions, genuinely interested to learn from what I thought. The more I’d talk, the more confident I’d feel. (Little, I’ve learned, makes you feel more confident than the sound of your own voice.) But then Sachin would spot something, and the questions would subtly shift, pointing at some weakness in the argument I’d been completely blind to. When I’d catch up to his train of thought and realize what had happened, I would quickly start walking back my statements, and be left wondering: How did he see that?

“How did he see that?” was a common echo in my head in those early days working with Sachin. He had this way of taking whatever question I was struggling to answer, tilting it by a few degrees, and suddenly everything would be clear. It felt like magic.

I learned quickly to take advantage of that magic. When I’d get stuck on a problem, it would just be a matter of time until I’d be knocking on Sachin’s (nearly always open) door. To be honest, I probably abused the privilege of having his office next to mine. And I wasn’t the only one. Sachin’s office seemed to turn into the unofficial meeting room, as staff members would all find themselves seeking his advice and getting into long and interesting discussions with him—and anyone else who happened to show up at the same time for the same reason. That included Sam Hinkie, by the way. If you were looking for Sam and he wasn’t in his office, he was usually in Sachin’s, doing the same thing the rest of us were.

Sam once told me that one of his decision making tricks was to watch Sachin’s body language when he disagreed. He said he learned long ago that if Sachin was strongly against an idea, you should at least consider just agreeing with him and save yourself the time—if you put in the effort to work through it like Sachin had, you’d eventually come out on his side anyway.

Working with someone like that is usually a recipe for ruffled feathers. But with Sachin, even if he was on the other side of a question from you, you never resented that intelligence and influence. That was in part because you knew that he was always after the best answer, whether it was his or not, and he’d happily vote to choose your suggestion when he thought you had the best argument. So the times where he did come out against you didn’t deflate your ego. You felt bigger, in fact, for having come to the best answer. Because it wasn’t your idea vs. his. It was him and you, together, hunting the truth.

So we were constantly knocking on that office door, constantly inviting him out for dinner or beers. He’s just so darn likable. Warm, kind, and almost never angry. (The only time I saw him angry was because something had violated his fierce sense of fairness and justice: someone wasn’t being treated right.) A great sense of humor, quick with his infectious laugh, and so, so interested in you.

It took me some time, but eventually I figured out: that was the magic. That was what tied it all together. The listening.

He didn’t have to have an opinion about everything, and he was incredibly good at knowing how much or little he knew. So when he was unsure, he would listen. He would find someone whose knowledge he respected in that area and bombard them with questions. (Of course, since it was Sachin, it would be the gentlest bombardment the other person had ever experienced.)

In a meeting, he’d say the least, but absorb the most. And at the end of it all, at the end of all that listening, he would synthesize all the points, reason through them, and give the most clear-eyed analysis of the situation.

When Sam Hinkie left the Sixers in the summer of 2016, Sachin was ready to move on as well—and (after a little time spent traveling) found he had no shortage of options. The word was starting to get out about just how good he was, and those that had seen the magic up close wanted an encore. Houston recruited him hard to come back, and he spent time consulting with them (immediately making his mark with some creative cap maneuvering to help acquire Chris Paul). He was then recruited to join the Pistons in Detroit, and just one year later his former colleague, Gersson Rosas, recruited him hard to take the #2 position in Minnesota. This summer, it was reported, Houston was working hard to try to bring him back. If it seems like everyone who’s worked with him before does everything they can to work with him again…well, you’d be right. Now, after the events of this past week, Sachin has the opportunity to lead an organization.

I, too, left the Sixers in 2016, and immediately started coaching high school basketball. So over these last five years, I’ve been thinking a lot about leadership. What does it really mean to be a leader? How do you achieve that as a coach? How do you teach it to players?

Yes, leaders command respect. Yes, leaders get people to follow them. Yes, leaders inspire loyalty. But how do you get there? It’s not as straightforward as the Hollywood depictions of stirring speeches and barked commands make it seem.

My time working with Sachin taught me that there are lots of leadership styles, and some of the most effective are the complete opposite of what we might expect.

The most common leadership style, the one we see on the big screen and in so many locker rooms, is leadership through authority, operating in such a way that people feel your power and presence. Using your position to reward and punish in order to get others to do what you want. Size and speech play into this style: There’s something primal about our recognition of hierarchy based on physical stature; we pick up on cues in conversation when one person talks the most, talks the loudest, or constantly interrupts.

That is not Sachin. Sachin listens more than he talks. He’s not a manipulator, playing political games or figuring out how to get people to fall in line. He’s genuine and transparent. But rather than cut against his ability to lead, those traits enable it.

The best leaders aren’t necessarily those who would be cast in a movie to play themselves. They don’t always look or act the part. But they’re exactly who you want in charge.