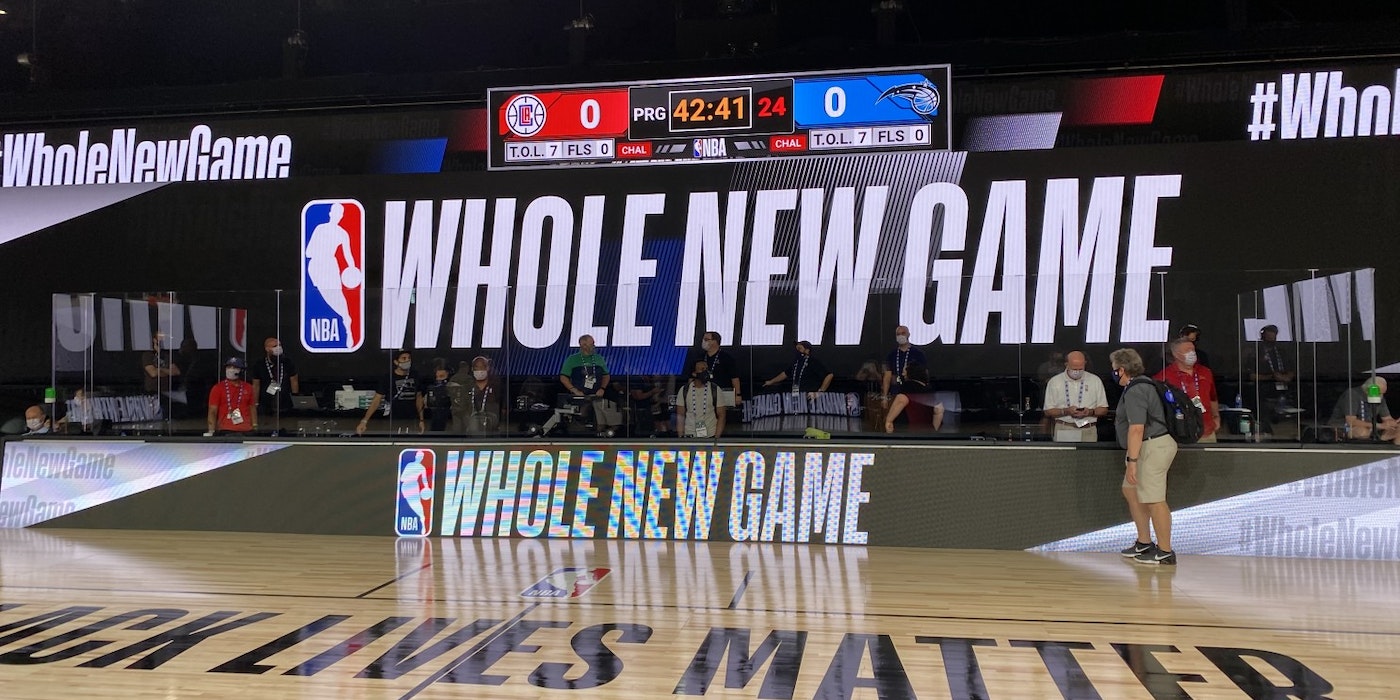 Should we be reacting to the results of the bubble the way we would a normal postseason? My thoughts on the unique challenges in evaluating bubble basketball, and the importance of maintaining perspective.
October 6, 2020

When Malcolm Gladwell penned his first bestseller, The Tipping Point, twenty years ago, he needed an example to illustrate a tricky concept from psychology: the Fundamental Attribution Error. The Fundamental Attribution Error, he wrote, is “a fancy way of saying that when it comes to interpreting other people’s behavior, human beings invariably make the mistake of overestimating the importance of fundamental character traits and underestimating the importance of the situation and context.” So what example could Gladwell use to make that more clear? Why basketball, of course:

This, it would seem, is the peak of context blindness. Observers pass judgment on basketball players’ innate abilities based on the results in front of them, without pausing to consider what might be different about the situation that could create such differences in performance. If Gladwell were to rewrite that section today, though, he wouldn’t need to rely on such a study. He could just talk about what’s happened in the NBA bubble.

The bubble plays a trick on us. The NBA has done a remarkable job of creating a great viewing experience, one with few reminders of just how different the environment is. For those watching games at home, it’s easy to fall into the trap of thinking this is basketball as usual. In many ways, of course, it is—the core aspects of the game haven’t changed. But there are still some notable differences from a standard postseason.

Let’s start with the fact that there’s no home court advantage in the bubble. As I wrote a few years ago:

That’s only one of the many differences. Players have had to deal with slick floors and coaches have had less time to prepare given the quicker turnaround times between playoff games. Young players have had months off to work on their game and improve, and haven’t faced quite the same pressure of playing in front of a large crowd on a major stage. Some players have surely benefited from the lack of distractions outside of basketball. Others have surely felt a major impact on their mental state, potentially sapping energy or motivation. Chemistry and familiarity built up over a regular season have been disrupted. And player conditioning (or lack thereof), particularly as a result of whatever players did during the long hiatus, has taken center stage.

This is not to say there should be an asterisk on this season. It’s a different year, but that doesn’t make the champion any less worthy. Everyone faced the same challenges.

But it is to say that, for decision makers, the evaluation of this postseason cannot be the same as others, because this postseason would seem to have a lot less to tell us about future postseasons than normal. For those who have to evaluate players or decide to fire coaches or are simply watching the results to learn, the most important question is not what happened, but what happened that will transfer to future seasons?

What can we learn about the paths available to build a championship contender? How much is this great run by the Heat a factor of them facing these unique conditions the best of any Eastern team, and how much is it something that could have happened outside the bubble?

What can we learn about various coaches’ postseason abilities? How much of the disappointments of the Bucks, Clippers, Pacers and Sixers were due to the unique circumstances of 2020 and how much of them were due to things that another coach would have done better? By laying the blame at the feet of these coaches are we doing the equivalent of judging players for missing shots in a poorly lit gym?

I don’t envy teams having to make these decisions. Filtering the results through the context of the bubble is enormously difficult. Surely we can learn something. But it might be far less than our instinct would tell us.

The 2014 playoffs started with a magical moment for me and my fellow Blazers employees: Damian Lillard’s walk-off three, sending the team to the second round for the first time in over a decade. But it didn’t take long for us to turn our attention to the next challenge we faced: the 62-win Spurs. That San Antonio team posed a number of problems to us, perhaps foremost of which was Tony Parker, a midrange assassin, going against a defense that was built around encouraging midrange shots. Should we change our pick-and-roll defense to play up higher and take away the long jumper?

We debated it, crunched the numbers, watched video, and determined that we wouldn’t change. It was the least of all evils. That Spurs team was a great offensive team, elite both finishing at the rim and shooting threes. If Parker beat us from midrange we’d have to tip our cap. Still, when he came out hitting jumpers, to many observers, including the television commentators, it looked like a mistake. Almost every time he made a long two the announcers would question our decision.

We got blown out in the series, but it wasn’t because of Parker midrange jumpers. That Spurs team was very good, and was on a mission to avenge their heart-wrenching Finals loss from the year before. Had we adjusted our coverage and Parker started finding rollers or spraying the ball to open shooters we’d have faced criticism for that too. To an outsider, those Parker jumpers were an easy thing to point to, and so that became a narrative.

This scenario plays out so many times during the playoffs. To some extent, it’s understandable. It’s the media’s job to analyze, to second-guess, to critique. If I hadn’t had the opportunity to be on the inside during those decisions, I’m sure I wouldn’t think twice about it. But when you are tasked with helping make the decisions, when your job is to do instead of only analyze, you realize there’s a big difference in perspective.

This difference in perspective between the doers and the critics impacts players most of all. It took me a while in my career to understand some of the resentment you hear from players about being criticized and analyzed by non-players, or why that divide even exists to the extent it does. Surely you don’t always have to have done something to be able to study and analyze it. A rocket scientist doesn’t have to have been an astronaut. I generally assumed it was some sort of defense mechanism. But I think this distinction between doers and critics explains much of it.

Imagine doing something difficult, say driving in traffic, and being second-guessed by a passenger for every mistake you make. “Why didn’t you just change lanes? That one is moving faster!” “Why did you get behind that truck, now we’re going to miss the light!” It would be infuriating. Not just because of the criticism, but because the critic isn’t behind the wheel. They don’t know what it’s like. They don’t know how impossible it is to be perfect.2 Now imagine that happens almost every day, and it’s beamed out to the whole world on TV or social media. You, too, would grow resentful of the critics. It’s a wonder any players are able to tune it out.

There’s a famous quote from President Teddy Roosevelt that captures just this sentiment, one that, not coincidentally, LeBron James has referenced multiple times:

“It is not the critic who counts; not the man who points out how the strong man stumbles, or where the doer of deeds could have done them better. The credit belongs to the man who is actually in the arena…who strives valiantly; who errs, who comes short again and again, because there is no effort without error and shortcoming…”

Doing anything worthwhile, by definition, means putting yourself at risk of screwing up—because if it was so easy that it involved no risk, it wouldn’t be worth doing. “There is no effort without error.” The real question is not whether mistakes were made, but whether too many were. To answer that, we need context. But critics can’t always see the context in which the doers operate. And they have the benefit of an entirely different context: hindsight.

We see this in the front office, where it’s very easy to point to players who teams missed on five years after the draft but very hard to do that at the time, where it’s easy to highlight a bungled free agency signing the next year even if everyone praised it at the time. And of course we see this with coaching, particularly in the playoffs. And particularly in this bubble.

The idea that we can sit on the outside and criticize after we see the result is, I realize, at the heart of sports fandom. We’re raised as sports fans with that instinct. It’s part of the fun! And it feels good to criticize, to feel like you know something others don’t. But it’s also unfair to the people actually making the decisions.

I’ll admit, I find myself falling into that state of mind all the time. In fact, the first draft of this article was much more critical of front offices that seemed to be judging their coaches as if this postseason was business as usual—until I realized I was committing the same error I was critiquing, judging without the full context.

This doesn’t mean decision makers are beyond reproach. It doesn’t mean coaches and front offices can’t improve their decision making in a ton of ways. But it does mean we should temper our criticism, and aim to lead with a little more understanding. We can recognize that analyzing after the fact isn’t analyzing with the proper perspective, and if we applaud a decision at the time it’s made, we shouldn’t criticize it once we see the result. We can try to be doers ourselves, going on the record with testable predictions at the same moment those inside the league are doing so.3