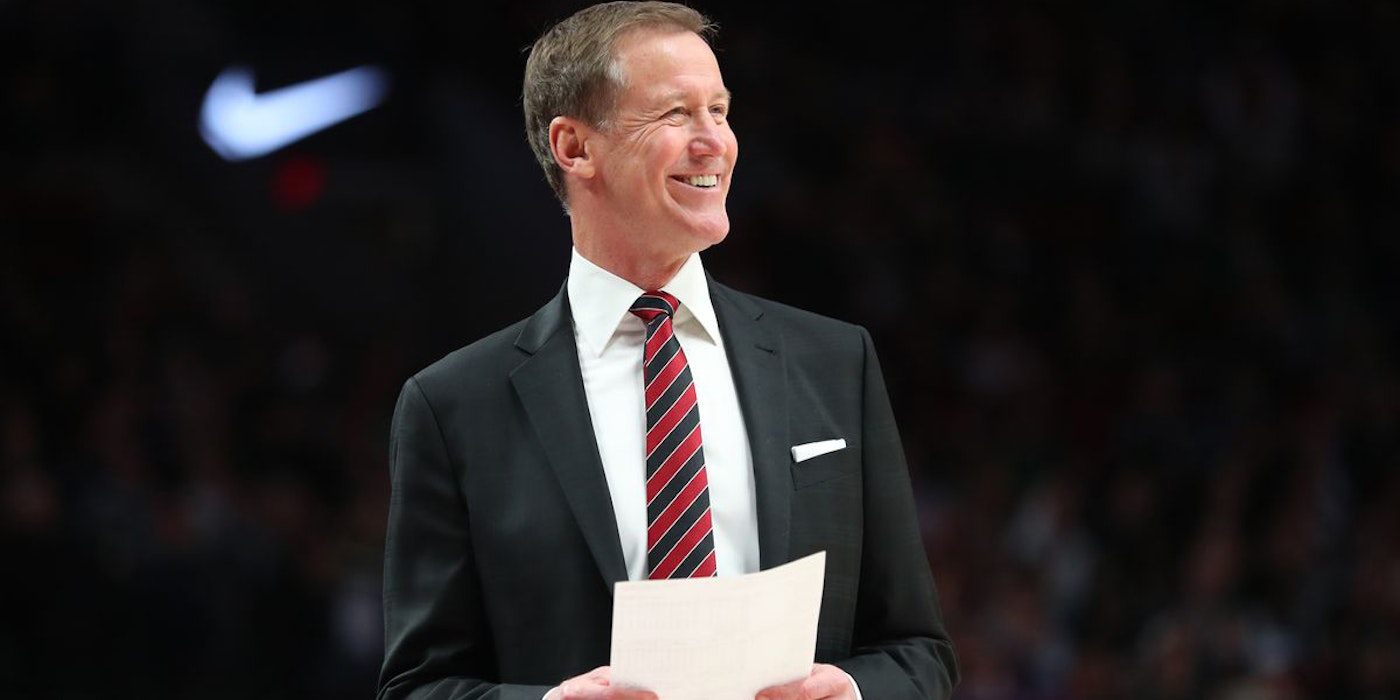 My time working with Terry Stotts taught me a lot about how a coach should interact with stats—and what it means to be a coach in the modern era of the NBA.
June 8, 2021

Looking back, it was a good thing I was so new to the NBA. A month after I started full-time with the Blazers as their Basketball Analytics Manager, our GM was fired on the night of the draft. Less than 12 months later, his replacement was fired. The next year wasn’t any easier: a disappointing start to the season resulted in the firing of our head coach and a roster teardown at the trade deadline. By the time we hit the 2012 offseason, you could forgive me if I was wondering what I had gotten myself into. But this was my dream job, and I didn’t know anything different. As far as I was concerned, this was just how the NBA worked.

The summer of 2012, though, marked a turning point. Neil Olshey was hired as the team’s new GM. As his first draft pick, he selected Damian Lillard. And for the team’s next head coach, he decided on Terry Stotts.

When I learned about Terry’s hiring, I was excited but uncertain. He was most recently an assistant coach with the Dallas Mavericks, who were known for embracing statistical analysis—but that was far from a guarantee he would be receptive to my work. So I called up Roland Beech. Roland had worked closely with the coaching staff in Dallas as a statistical analyst, and if there was anyone who had insight into how Terry would think about statistics, it was Roland.

It didn’t take long for Roland to calm my nerves. He had incredibly positive things to say about Terry as a person, and lauded his open-minded approach to the game. But it was one particular line that put any doubts I had to rest. “If you give him a table of stats,” Roland said, “he’ll find the typo.”

I’ve thought about that line many times in the years since, because I think it’s the most succinct way to say what it really means to engage with stats as a coach. Terry finding the typo meant he wouldn’t just ignore what you gave him, he wouldn’t just glance at it, he wouldn’t just read it—but he would read it and think about it. He would critically engage with what you presented to him, to the point that he could find when a number didn’t make logical sense, and so must be a typo.

That is a great model for how to interact with statistical analysis as a coach, or any decision maker. Not just to ignore the analysis, or to blindly accept it, but to think critically about it. To challenge it. To stretch yourself out of your comfort zone when the evidence suggests it, and to push back against it when warranted as well.

Terry exemplified all of that. He integrated me into the coaching staff, and it wasn’t just for show. He allowed me to challenge some of his thinking, and he challenged much of mine. When I could present a strong enough argument, he would shift. When I couldn’t, he would force me to reconsider my position. And he certainly found a typo or two.

While that kind of mindset has always had benefits, its importance has increased exponentially in the current era of the NBA. There is more information and technology than ever, and both continue to multiply. These can be incredibly powerful tools in the hands of a coach who can figure out how to properly integrate them into their thought process and think critically about them. But coaches who ignore them, or blindly trust them, do so at their own peril.

We talk often about how the modern NBA rewards players with different skillsets and talents than the NBA of the past. The same is true for coaches. And that’s not only about being able to use data and technology. The days of authoritarian coaches are fading; those who can form meaningful relationships with their players have been able to have much more of an impact. Coaches who can see the big picture and not get buried in the weeds of the day-to-day, who can establish great working partnerships with the front office and understand the role each person plays in the organization, who can put aside their own ego and do what’s best for the long term health of the franchise—those are the coaches best suited to the modern NBA.

And that’s Terry. So, in my mind, it’s no coincidence that he had the success he did over this past decade.

After all that Blazers turmoil when I first arrived in Portland, the 2012 offseason created a run of incredible stability. Neil Olshey, Terry Stotts, and Damian Lillard all joined the team in 2012. Next season will be the first since then without all three.

Terry leaves Portland as the second winningest coach in Blazers history, in the midst of a streak of 8 straight playoff appearances. Perhaps most impressively, the team consistently exceeded expectations: in these past 9 seasons, Portland outperformed their preseason Vegas win total by almost 4 wins on average1. That’s, by far, the highest mark of any franchise in that time.

Wherever he coaches next will be lucky to have someone who fits this era of the NBA so well. But a word of advice to anyone handing him a sheet of numbers: double check it a few times before giving it to him. Because, I promise you, he will find that typo.