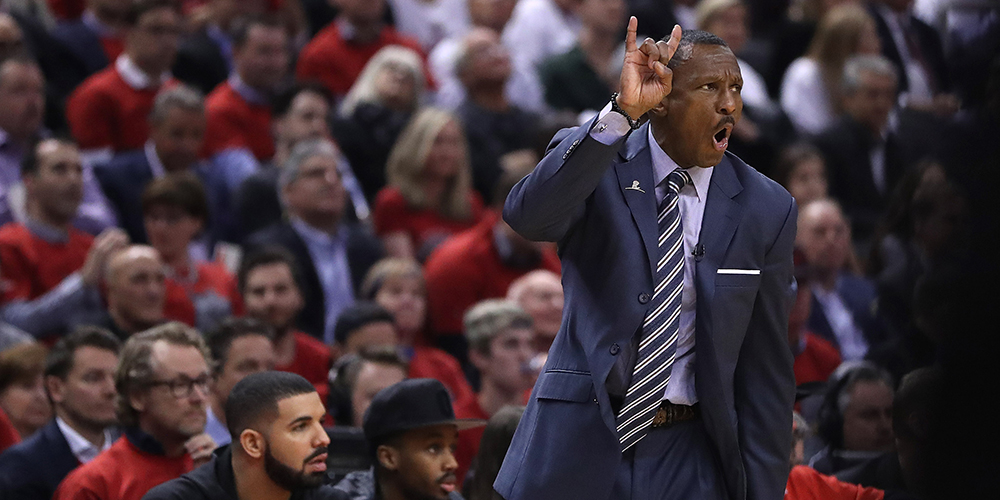 Where I answer: (1) What happens at halftime? (1) How often do teams change their visuals? (3) How advanced are the techniques and technology used by NBA front offices?
November 28, 2017

Ask Ben is a regular feature where I’ll answer questions from subscribers. Have a question for me? Ask it in Cleaning the Glass Discussion and I’ll either answer there or make it part of a larger article like this one.

What happens at halftime?

We all know that the game changes fast after players come out from half time. Is there any analysis involved in the half time of NBA games? Like a video or stats report?

The first time I sat behind the bench for a game and went into halftime, I was shocked at how quick it all was. It is the longest break in the game, and a real opportunity to make adjustments — but it is also much faster than you’d anticipate. This was my experience, which I think is generally what it’s like around the league:

The buzzer would sound, and players and staff would line up and file off the court and head toward the locker room. Players would go in, but the coaching staff would stay outside and huddle in a group. This would give the players the space to talk amongst themselves and say what they wanted to say without coaches present, and would give the coaches the chance to discuss what they wanted to tell the players.

Coaches would review the video edit the video coordinator had prepared to show the team. This edit would be have been compiled from clips that the coaches had highlighted during the first half and sent word to the coordinator to prepare. They’d note any clips they’d want to take out and the coordinator would rush back in to make the appropriate edits.

They’d silently look at the stats and process what had gone on. Sometimes this would mean the simple boxscore that is handed out to coaches at each timeout. Sometimes these would be more advanced stats provided by the analytics team. Sometimes it would be stats that a specific assistant coach was tasked with recording throughout the game. Then they’d share their thoughts and hammer out what they were going to say to the team, and head into the locker room. This would typically take a few minutes.

Once in the locker room, the head coach would make the points he wanted to make, using the video to underscore them: changing a coverage, tightening up execution, or highlighting something to be aware of. When he was done, the head coach would open up the floor to assistant coaches or players that might want to make a point. The discussion would end, the players and coaches would all go take care of anything they needed to (for example, go to the bathroom) and then head out to the court to warm up and prepare for the second half.

Halftime is an opportunity to adjust and discuss, but not to change anything drastic. It’s like a NASCAR pit stop — in-and-out, tweaking, refueling, and then right back at it.